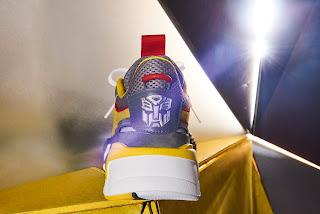 PUMA and Hasbro have teamed up to create exciting Transformers themed footwear! PUMA will combine the Transformers theme with its RS-X shoe, which is based on the iconic 1980s Running System (RS) line. For PUMA and Hasbro, the launch of this collaboration comes ahead of an important date for Transformers fans: the release of the BUMBLEBEE movie which hits theaters this December.

The PUMA x TRANSFORMERS range will be sold exclusively at Foot Locker stores. More details will be revealed over the coming weeks.

Global sports brand PUMA has teamed up with play and entertainment group Hasbro Inc. (NASDAQ:HAS) to create exciting Transformers themed footwear. First introduced by Hasbro and Japan’s Takara as a toy series in 1984, the adventures of the robots which can transform into motor vehicles also became a popular cartoon series. With the more recent addition of a blockbuster cinema franchise, Transformers has turned into one of the most recognizable brands in entertainment. Millions have watched the epic battles between Autobots and Decepticons, and protagonists such as Optimus Prime and Megatron have become household names.

Partnering with creative brands to bring consumers a range of appealing products, while pushing boundaries with futuristic design and style, has become a key part of PUMA’s strategy. PUMA will combine the Transformers theme with its RS-X shoe, which is based on the iconic 1980s Running System (RS) line. For PUMA and Hasbro, the launch of this collaboration comes ahead of an important date for Transformers fans: the release of BUMBLEBEE, the latest cinema blockbuster in the franchise.

“We are proud to collaborate with PUMA, one of the world’s most popular and respected sports apparel brands,” said Nikki Gie, EMEA Director - Fashion & Home, Hasbro. “With nostalgia for the 1980s at an all-time high, we are excited to bring together two 80s icons for the first time: Tranformers and the PUMA RS shoe. We hope fans everywhere will rock the Transformers RS-X sneakers when they come out to see even more 80s vibes in BUMBLEBEE, in theaters this December!”

Adam Petrick, Director for Brand & Marketing at PUMA adds, “We are excited to partner with Hasbro to create a fun collaborative collection that will bring the iconic robots to life. Having achieved global icon status, Transformers make perfect partners to push forward stories of reinvention within modern-day pop culture”

The PUMA x TRANSFORMERS range will be sold exclusively at Foot Locker stores. More details will be revealed over the coming weeks. Follow @PUMASportstyle for release information.

PUMA is one of the world’s leading Sports Brands, designing, developing, selling and marketing footwear, apparel and accessories. For over 65 years, PUMA has established a history of making fast product designs for the fastest athletes on the planet. PUMA offers performance and sport-inspired lifestyle products in categories such as Football, Running and Training, Golf, and Motorsports. It engages in exciting collaborations with renowned design brands to bring innovative and fast designs to the sports world. The PUMA Group owns the brands PUMA, Cobra Golf and Dobotex. The company distributes its products in more than 120 countries, employs more than 11,000 people worldwide, and is headquartered in Herzogenaurach/Germany. For more information, please visit http://www.puma.com.

Hasbro (NASDAQ: HAS) is a global play and entertainment company committed to Creating the World's Best Play Experiences. From toys and games to television, movies, digital gaming and consumer products, Hasbro offers a variety of ways for audiences to experience its iconic brands, including NERF, MY LITTLE PONY, TRANSFORMERS, PLAY-DOH, MONOPOLY, BABY ALIVE and MAGIC: THE GATHERING, as well as premier partner brands. Through its entertainment labels, Allspark Pictures and Allspark Animation, the Company is building its brands globally through great storytelling and content on all screens. Hasbro is committed to making the world a better place for children and their families through corporate social responsibility and philanthropy. Hasbro ranked No. 5 on the 2018 100 Best Corporate Citizens list by CR Magazine, and has been named one of the World’s Most Ethical Companies® by Ethisphere Institute for the past seven years. Learn more at www.hasbro.com, and follow us on Twitter (@Hasbro & @HasbroNews) and Instagram (@Hasbro).


Thanks to Hasbro and their partners for proving Zone Base with this news.