I'm going to Siege them all when I see them 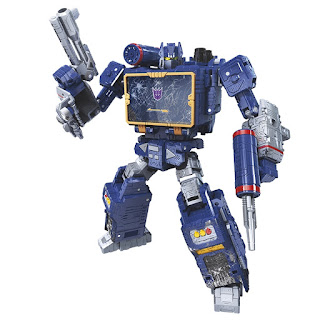 Being a nighttime worker, I'm usually asleep when cool toy news hits the internet. Which is a mixed blessing as I don't have to wait for each increment of news to drip out of the news Keurig, but if there was some surprise sale thing it's usually long gone before I'm ever aware of it *sigh*. Though if I want such nice things as new Siege toys as well as somewhere to put them, I gotta work *shrug*. Today whilst I slumbered was the Hasbro showing of upcoming Transformers Siege toys at New York Comic Con. Man, if I wasn't already excited for these... I have no analogy... I'm really excited for these. I might shit my pants.

The highlight of the news was finally a look at the Decepticons and boy look at those Decepticons! They showed off a brand spanking new Soundwave with Micromasters for cassettes! That is a super good use of the concept. Laserbeak is even in his More than Meets the Eye design which is just wonderful! Soundwave turns into a spaceship that looks an awful lot like his weird lamp post alt mode from the same episode. Which works well as Mothra may have been all for a lamp toy, but it's not very exciting on a toy box.

The Micromasters, Battlemasters, and Weaponizers are really fun and are exactly the kind of thing I go crazy for. I also appreciate how the standard bots looks like their classic selves, but still updated enough to not just be a rehash of things I've already bought. Reflector is a pretty genius idea. Since he's traditionally three identical dudes, you can buy him individually and still have a solid toy and not complain about the cost of three identical toys. Though, since most fans would buy three, three of them can combine to form the camera mode.


I like the battle worn appearance and the tech detailing. It's another neat way to make the toys stand out visually from prior versions as well as sell the War for Cybertron theme. You know... they're fighting a war, gonna have a few boo boos. I'm really looking forward to these and hoping they start showing at Christmas time like POTP did last year. The wife sure did Siege up a bunch for presents (I'm very patiently waiting for the holiday for the new card game) and well... that's the kind of awesome I can live with! 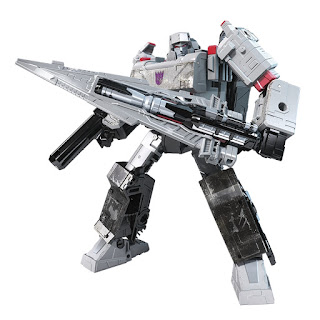