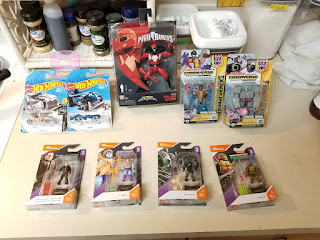 Honestly, not a whole lot. Though it did seem like quite a bit. Perspective is everything I assume, and I was tired when I got home so I say a lot. After sleeping off my work night, the wife and I went out for a bit of shopping Saturday. Normally we order our groceries and schedule a pick up time, but this week we decided to physically shop for them. We do this occasionally just to see what all new might be in the store. We also wanted to get out for awhile to look for new Halloween stock and with the short week from labor Day, we didn't feel like doing our normal order list throughout the week.

Friday, the wife stopped at Kroger and found the remaining Mega Construx Heroes series 3 figures I had been needing. So far I had only found the T-1000 and was starting to feel a bit hopeless on it. I know that's some strong working, but I really didn't want to order figures that I should be easily able to find. Partially because the price gets jacked up and second the availability isn't always there. So if you're like me (and you're reading this, so presumably so) it's a bummer to miss out on stuff sometimes. I've been really enjoying this series, not buying everything... but close to it. Series 4 (post regarding it coming soon) has some good looking options in it, so I'm hoping it's easier to find.

Saturday when we went out to see what all Halloween stuff might be out and do that grocery thing I talked about above, we stopped by Target and they had restocked the Cyberverse toys so I snapped up the Scout Starscream and Megatron. I'm enjoying these Scout class dudes (as I've said before and before and maybe again before) and they're easy enough to collect. Though, it is a hard pill to swallow them being $8 considering a Legend was $10. Though, the toy economy is always changing and as I always say, you gotta pay if you want to play. I'm looking forward to the crazy recolors in the future. That's the kind of thing that really makes these smaller toys fun.

I had mentioned Zombot Friday night and found one right off the bat in the Hot Wheel section at the same Target. He was so under my nose this entire time that he was just right there on the hook as I walked up. Weird. I got the blue one, looked as hard as I could for the red version, but that wasn't in the cards (he's a chase item). I also grabbed this rad x-ray truck, it just looked too cool to pass up. We bought more Halloween candy than we should and a stop by Kroger to peruse their Halloween merch left to a new blow mold to go with out others and then a disappointing trip to Home Goods. Starting to think that store sucks.

This left us with a quick lunch and a few hours at Walmart for groceries and their awesome Halloween section where we once again bought too much (and made of list to get next weekend) stuff. Walmart had the Evil Red Ranger figure I've been looking for the past few weeks and for that I was happy. Aside from hoping to get the Bullrider Megazord sooner or later, that's probably it from Ninja Steel for me. Just one more stepping stone towards Beast Morphers! The Evil Red Ranger was pretty cool to me as I thought the Ranger clone army from the 25th special was really neat. Not to mention, I'm mainly a fan of MMPR first, so a evil version of the Tyranno Ranger is right in my wheelhouse. Right in it. Nothing but net.

I won't bore you with what we got for groceries (ok fine, we got bacon for Sunday breakfast) but we pretty much did that before going home. We tend to spend our Saturday nights at home watching spooky stuff and try our best to relax on Sundays. Just to get that recharge in before the work week. Oh, and Sunday night the first episode of Transform Squadron went up. That's the new podcast of Zone Base. Yep, that's it. I plan to have one at least once a month. Hopefully you all like it!
at September 10, 2018
Email ThisBlogThis!Share to TwitterShare to FacebookShare to Pinterest
Labels: Halloween, Halloween Horrorcon, hot wheels, Masters of The Universe, Mega Construx, Mighty Morphin Power Rangers, Power Rangers, terminator, TMNT, Transformers, what the heck I did this weekend, zombot, Zone Base