Being the second Kronoform commercial I've posted this week, I think it's safe to say it's been on my mind. Thing is, I think Microman and it's related extensions are super neat. Part of the charm of Transformers is the idea that the car that just drove by could be an alien robot from space. Microman follows this same idea, just the adventure is so tiny it's just under our noses. With the Microchange concept, that micro-cassette you used to record a lecture in class could actually be a robot fighting a battle while your not aware. I mean, those little dudes just up and had a fight in the living room on that end table where all the remotes get thrown. Whoa.

Diakron and Kronoform are particularly sticking out to me as we put so much focus on Diaclone and Microman that what is essentially the missing link in Transformers history gets looked over. Sometimes I wonder (and I've done it here before) how things could have been IF Takara was successful and the deal with Hasbro never happened? How different would things be right now? As I was writing that, it occurred to me that the Michael Bay movies would have been a little truer to form... 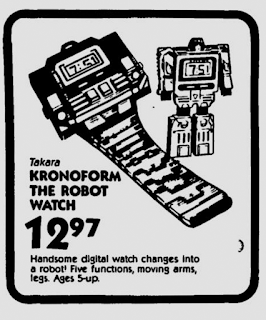