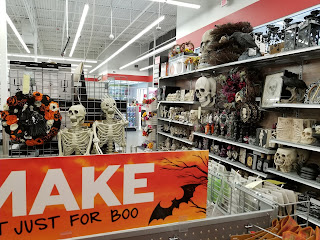 Halloween is a tricky season. It has to bide it's time for Back to School to wrap up before it can start getting stocked. Sure it creeps up here and there, but as Back to School isn't a hard date universally, it's kinda at the whim of kids getting pencils and then coming back to buy all new pencils after the teacher tells them those pencils just won't do (anyone else have this kind of problem back then?). These days late August seems to be the general cutting off point where stores finally start wrapping up the pallets of notebook paper and putting out the day-glo trick or treating pails. You can't set your clock to an exact time, but you can always assume stores that specialize in decorations are going to be the first to throw down the orange and black. So this past Saturday my wife and I went to a bunch of those.

Michael's really brought the noise, with aisles decked out in spooky parlor. We went to two different stores, the first not having as much as the second (but man the second had a ton). Of course they had the usual miniature spooky town set up and craft related stuff. But they also had tons of various skeletons, pumpkins, and black cats. The kind of thing you absolutely need for a proper Halloween mantle. One thing I've been noticing, certainly in Michael's, but also in general is a vintage theme in a lot of the Halloween decorations this year. I believe the proper term is 'old timey', but there's a neat early 1900's look to a lot of the stuff and honestly I dig it. 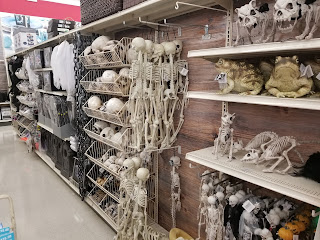 I've never intentionally went inside a Home Goods before, usually I just walk through it to go to the bathroom as our local one shares a space with TJ Max for whatever reason. Though we've come to learn that they usually have some neat Halloween stuff. They were just getting started Saturday, with just a small (but neat) selection. Also they had a group of little girls running in between people and legs at any moment like a pack of feral creatures. I think I almost fell over them at least a hundred time in the 10 minutes we were there. They were the worst. 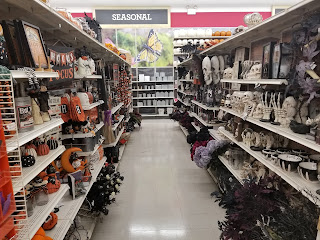 We also went to Ross and Tuesday Morning who had a smattering of items out, Tuesday Morning having more, but Ross having this giant skull that I kind of want. I want to put it on my porch as a sorta universal symbol that I could be in a metal band and my name could be Snake. Though both let me down in the robot department. So, I guess I'll have to visit some other locations. Because I freaking want a Cogman. Either way, sooner or later more and more Halloween stuff will be on shelves. Usually our local Walmart has it out in full force come Labor Day Weekend, which is a nice slamming of the door on summer and opening arms to fall. 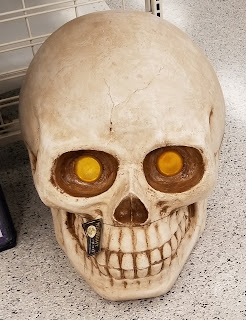