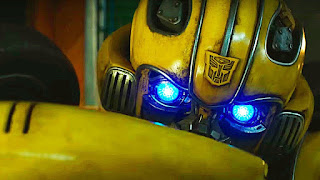 Turns out all those talks of the TF movie franchise being done for were misspoken as news has came out that more Transformers movies are in development. It's not too far from some of the opinions I've shared here before, but I'm not patting my own back, just feeling a little vindicated in how I've read things. The dip in profits from TLK wasn't a flop as folks who'd like you to think it was (still trying to figure out how almost tripling it's budget in ticket sales works out to a flop...but that's just me... living in the real world), just a sign that it's time to freshen things up a little. The Bumblebee movie looks to be exactly that breath of fresh air everyone needed and even though the movie could still be a dumpster fire and die on arrival at box offices, the reception is vastly different so far. I mean, it's a year and a half after the last movie in release, a smaller gap than ever before. Folks are outright positive over it thanks to a short trailer here, small glimpses there, and pictures of toys everywhere.

Let's think about this, the toys that have been previewed thus far are children's toys intended for children and adult fans aren't pooping all over them (a few are, but some people always will). In fact I've seen mostly positivity towards this, which is so damned refreshing. I mean... man it's nice to see positivity towards a TF movie after a decade of negativity (unless they get something free, then those dudes will straight up hop fifty feet over and ahead of of you to capitalize).

I really hope this positivity continues to go forward and the movies deliver something close to expectations. It's nice to enjoy something without having to ignore the obnoxious negative crap.
at July 18, 2018
Email ThisBlogThis!Share to TwitterShare to FacebookShare to Pinterest
Labels: Bumblebee, Bumblebee movie, fandom, Hasbro, movies, tf5, the last knight, Transformers, Zone Base