Godzilla: City on the Edge of Battle 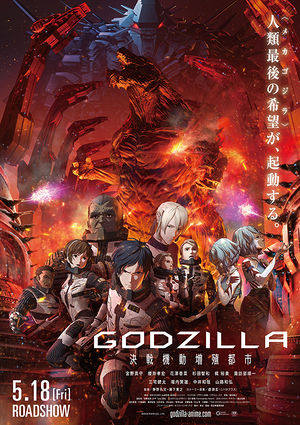 Despite my best intentions to watch the newest installment of the Godzilla animated trilogy on it's Netflix release last weekend, I was just too busy and had to wait until this weekend. Bummer, but that's life. I had already read some brief spoilers from it Japanese release a few months earlier, but still was looking forward to seeing it for myself. Like with the first part, I enjoyed myself quite a bit.

The animated movies are a real slow burn and  heavy on the science fiction of the scenario, so don't expect a ton of action or a mindless explosion factory. Themes of humanity surviving an apocalyptic situation are still present here as well as the ever present technology vs humanity theme that's a mainstay of science fiction. I don't plan to spoil anything, so I'm purposely being vague about details.

I definitely dug the military scenes and equipment. Just like before, I felt as though I was watching a Diaclone adaption. The mech suits get an impressive upgrade and dammit I want Godzilla anime toys. There's Mecha Godzilla amd Godzilla stuff from the series, but a nice micro playset would be boss.

If you liked the first one, watch this one. Don't miss the post credits scene. Trust me.
at July 29, 2018
Email ThisBlogThis!Share to TwitterShare to FacebookShare to Pinterest
Labels: anime, cartoon, cartoons, city on the edge of battle, Godzilla, Godzilla Monster Planet, Japan, japanese, kaiju, monster planet, Netflix, sci fi, science fiction, the city mechanized for battle, Toho, Zone Base