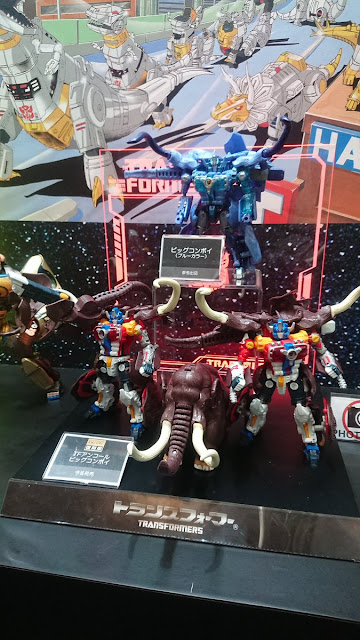 At Wonderfest this past weekend, Takara showed off the upcoming Encore Big Convoy figure. I'm pretty tempted to get him as he's in show accurate colors, but what I really want is that blue version in the picture. There was several versions of that mold already back then and even a few in the US. So far I've got the Korean version of the original. The Nemesis Prime version from Target, and the Ultra Mammoth from the TFCC a few years back (it was something I had wanted since beast era was going on). I hope the Encore blue version is easily obtainable because, seriously, when it's too hard to get something that's currently available. I don't want to bother. There's no reason for that anymore. Convention exclusive, well that's fair. But if it's just online in a second and sold out the next... well, I ain't playing. I'm 40 years old and have a fairly busy personal and professional life. I can't sit in front of a web store all day and refresh it every few seconds hoping to get a purchase in when it's available and before it sells out. I don't feel like being punished for being a functional adult and won't be. So, hopefully that blue version is not too hard to get, because I'd really like to get one.

This is one of my favorite molds, so obviously I'm tempted to get it again.
at July 31, 2018
Email ThisBlogThis!Share to TwitterShare to FacebookShare to Pinterest
Labels: beast era, beast wars, beast wars neo, big convoy, fandom, Japan, japanese, Takara, the best era, Transformers, wonderfest, Zone Base