Power of the Primes Battletrap 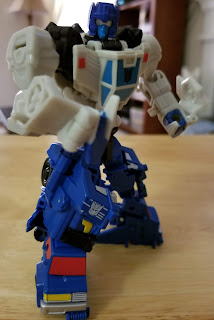 When I talked about Battleslash and Roadtrap, I said they were parts of a combiner that's the newest incarnation of Duocon Battletrap right? That's right I did and here is is in all his Trappin and Battlin glory! The two toys form a pretty well done new version of the classic character. 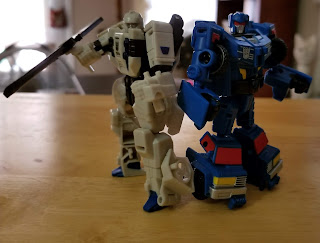 The two smaller robots form Battletrap who's roughly deluxe size. He's the sum of both parts and it shows as the two distinct forms show clearly, which is part of the Duocon theme after all. I can't find any fault with this approach and hope Flywheels gets similar treatment (I've always liked him).

As I've noted before, the two toys are nice looking, but are obviously intended to form a bigger mode and it really pay's off here. I can't really find any faults with the toy as he forms together pretty well. If I have anything negative to say, it's pretty minor. I'm not fond of how parts of Roadtrap come loose easily in leg form, making the knee's look a little messy without sticking them back together (that could also be just mine though) and that helicopter blade of Battleslash is just kinda stuck in the back of Battletrap kind of awkwardly (I did say I'm usually never happy with how helicopter blades work out). There is an attempt to stow it between parts, but the bottom half is still dangling.. I'm sure if the components were deluxe or larger, there would be an additional few steps to work this out better. As is, it's just part of the scales economy and not the end of the world. Two minor gripes in an overall great toy is pretty reasonable and there's always a little give and take with any combiner. 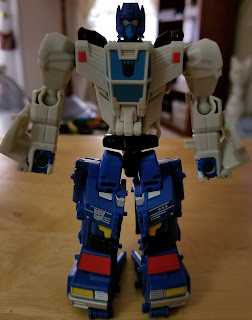