The impeding rumors of Micromasters in the upcoming War For Cybertron Generations line just keep me in a state of hope and excitement that just cannot be contained. I keep thinking about possible scenarios where I have a money bin like Scrooge McDuck full of Micromasters that I swim around in and occasionally have to visit the Emergency Room to have them removed from my nose. The prospect of what's to come is just mind shattering (and pants shatting) in terms of stuff that I would really want. Then it hit me. Which was rude, I'd rather talk it out, but here I am with a black eye from an idea that I wear like a badge of honor.

The ongoing rumor also hints that the two main size classes in WFC will carry the Micromasters and Battlemasters. So, I think of integration, how if the bulk of the line is micro sized and if say the leader class would ultimately be gigantic in scale... 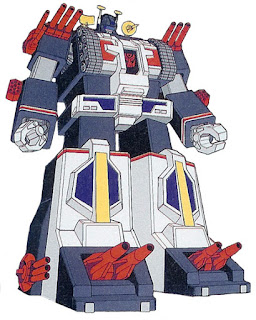