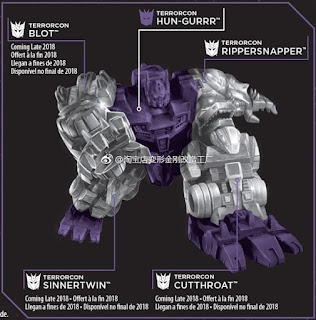 Earlier, I lucked up on finding Hun-Grrr from Power of the Primes when the Walmart by my work apparently got a few cases of Voyagers. I had been slightly worried as the Terrorcons are kinda a big deal to me and I had been hoping to get my new Abominus without much trouble. I've had Rippersnapper since March when the wave 2 deluxes were part of the birthday presents from my wife. Then as luck would have it, POTP toys started getting spotty distribution for awhile there, I started to worry I'd have to pay too much on ordering him or the Takara version.

It doesn't help that so much doom and gloom is going around and making the outlook look like we'll never get these figures. Facts are facts and we know POTP is shorter than anticipated and Transformers is having a bit of a slowdown. But if one remembers the giant leak from last summer, it outright outlined the majority of the toys in the line. It just so appears that the line is a bit shorter than we're accustomed too for whatever reason. But assuming Studio Series is in the general same arena as Generations toys to the corporate offices of Hasbro, it might be a little more easy to see. And frankly, if War for Cybertron is running side by side with more Studio Series figures (and by all accounts looks to be) it may be a little shorter as well. Because they may consider it in the same basket at those corporate offices (it's not a stretch to see how and why they might). Or they all could simply be coming from the same factory in different production cycles.

What helps me form that train of thought is looking at how the line has played out in release. First waves were at stores right before Christmas. Second waves started right as spring started hitting and by late spring it was all Studio Series. Until what is now early summer as those are at retail saturation for the first waves and what do we have? Well the rest of those POTP wave 2 voyagers have been popping up as well as the third wave voyagers are showing up. It's like something came unplugged in the distribution channels all the sudden right? Looks like the Studio Series initial push might have bottle necked things a little, at least to me (this is all my opinion after all). But thinking about it, since wave 2 was so sparse after first showing up 2-3 months ago, I wonder if it's still shipping?

Now, what about those wave 2 Legends. Well, wave 2's are usually harder to find in any line and man I really hope I find them sooner or later or I'm going to cry a big old pile of tears. BUT, what about that dooming and glooming that's been crying out? What about wave 3 deluxes, will we ever get those? Well, look at that pic of Abominus above. It's an official image, it's from those image leaks from last October, before all the recent doom and gloom. Read the other three members info. 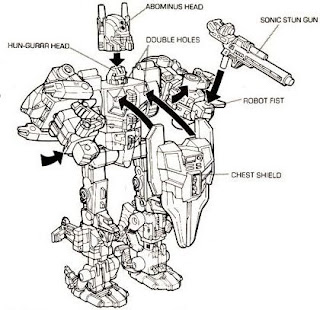 So, seeing as we don't know about things until after the decisions are already made (everybody is just an arm chair quarterback in this game after all), I think the rest of POTP is intertwined between batches of Studio Series and that first batch of Cyberverse (due in the fall). When in that Financial call report, it's reported that by December 2018, "Power Of The Primes will effectively close down the Prime Wars ‘event’ which took place under the Generations banner.". So going by the picture up top, that report, and just putting things together, I think everything's going to be fine. Just spread out and maybe a little janky in distribution (there could be another dry patch in between batches). Though I have been wondering if Hurricane Harvey might have caused a brief plastics shortage since it happened. That could have also come into play if it did have any cause and effect.

Of course I don't know for sure, I don't claim to know everything. Just I've been at the TF game for a long time, and I've learned how to anticipate things. Professionally, I've worked a lot in logistics and various contract based businesses that require multiple factors and different hands at parts of the process to complete a product on time. I have seen what issues can and will happen if one of those hands has a problem and boy it can be a mess. Hell, maybe the sky is falling and it's as grim as the gloomy prediction readers see in their java script crystal balls. Who knows for sure? Time will tell, but we just have to wait for time to tell.