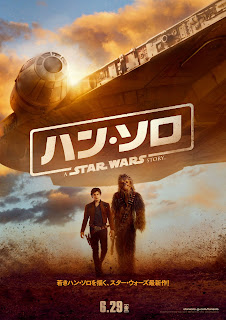 Well, that sure was a blast. A real fun, just thrill ride of a Star Wars movie. I've been hearing the usual amount of naysaying doing the usual naysaying, but I thought Solo was perfectly fine. Honestly, I was very surprised as going in as I was expecting a mess. What I got was a fun adventure with a young Han Solo and a bit of set up to how he became who we knew him to be later on.

I'm trying my best to not spoil anything, so the best I can tell you is that Solo, like Rogue One, isn't your standard Star Wars movie. That's probably got alot to do with why I enjoy these Star Wars Stories films so much. By exploring the expanded universe (sans novels) they can afford to be different than the saga movies that dwell more on Jedi, the force, and the overall major points. Here we get to see things that were mentioned in the Saga fleshed out in grandiose ways.

Solo is a great heist film set in a space opera setting that takes place in one of the most famous film series in the world. I'm very happy with what I just watched and look forward to getting that Blue Ray.