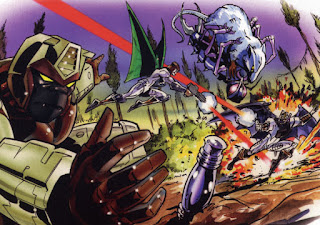 Sometimes, as a Transformers fan (or I guess a fan of anything) you get asked what your favorite era of fiction is. I always say beast era and when I specify more, my favorite parts is the Beast Wars cartoon and the 3H comics (even after BM ended their setting was post BM Cybertron). Not that I don't love G1 and other eras (that's probably apparent in these posts here), just that's the pinnacle for me. My absolute. I love the story telling and can go back to it time and time again. I'm taking time to talk about the 3H era stuff as the Omega Point story line is just *kisses fingers* magnifique.

I'll just go ahead and recommend you check out 3H and everything on the wiki. Just so I don't spend too much time going all over that for those of you who don't know and considering the growth of the TF fandom over the last decade, it's easy to understand that some of you missed that and may not know.

One thing that made the 3H comics so fun is they not only featured the BotCon exclusives, but also non show characters. While Beast Wars may look dated now, that mid 90's cgi was pretty big for a syndicated cartoon show budget, and owing to the fact that each character transformed created double the CGI models for each character, made for unfortunately a smaller cast. This during a time when toy lines had more than multiple versions of the main characters. So that really cool toy you bought who wasn't on the show, got a life in these comics.

Adding to the fun, the Omega Point story line was a Unicron story in the beast timeline (this was before he was used to death during the mid 2000's) and in a way similar to his use in the Marvel UK comics. Essentially, Shokaract is empowered by Unicron's dark essence. Not to mention, there's no handy dandy matrix of leadership laying around to run him off. So Unicron is wrecking havoc and the time tested way to deal with him isn't there. So these expanded universe characters go on a most excellent adventure over the course of a few years of fiction.

It's a pretty awesome story arc, and I think a good deal of it can be found online if you ever get curious enough to read. IDW did a slight retelling of the events in their Beast Wars comic series, which hits the main beats, but tells the story differently. I remember reading it being very impressed they bothered to retread it, even as differently as they did. 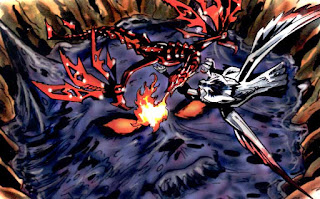