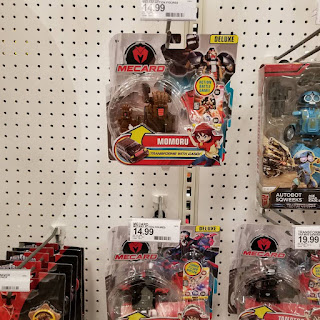 A few months ago, I said noted on the neatness of Mecard and had hoped it would start turning up here in the US. I guess I'm psychic as I found it at Target the other day as well as heard from others that they've seen it a far as a few weeks back. That's great. I've noticed a really similar line to it in the car toys section of stores usually next to the Havox Machines toys in recent months. I guess it's not too surprising as it's been popping up in Canada that it would find it's way here. I was tempted to get some but passed for the moment (had like a million things to buy, so didn't exactly feel like buying anything else), but may grab some soon. They're certainly neat and after marveling at their ads for a bit now, I'd be foolish to pass a super easy opportunity to pick a few up. Especially as they're at my local Target.
card game cards Korea Korean Mecard neat robots super robot super robots toys Turning Mecard Zone Base