Memorial Day Weekend is finally here and boy are my arms tired. Because I work a hella lot and haven't really had much of a break this year. So, of course I'm heavily looking forward to Memorial Day, but really I do every year. Even though as an adult, summer doesn't quite mean as much to me as it did when I was a kid, I still look forward to all the fun it has to offer. Memorial Day pretty much was the kick off to summer break, which is the reason why stores around here sell fireworks for Memorial Day. Because it's time to have a ton of fun ya'll.

I know it's technically still spring, but I live in Georgia and it's already 90 degrees outside. The heat sucks, but is part of the overall fun. This weekend first thing I have planned is... well I got to buy some tires. So... you know... that's not really fun... but after that, heck yeah. Bloodstained: Curse of the Moon releases this weekend and I've already got my joy cons charging in anticipation of some monster fighting fun. See, I've always joked that I start mentally doing Halloween in spring and a big part of that is summer has always been my prelude into Halloween. Christmas in July, Halloween in May.

When I was a kid, I usually spent my summer breaks watching tons of horror either on VHS from the local video store or on TV as most channels seemed to play the crap out of 80's slashers during summer break. I just automatically associate the season with horror and it leads directly into the horror holiday. Worked into that is 80's metal. I genuinely love 80's metal as is, but it's also something I closely associate with horror and Halloween. Not only is the genre used a lot in soundtracks, but the imagery is pretty much Halloween decorations. It just goes together. Needless to say my horror movie viewing and 80's metal listening goes up during summer. I've literally been listening to Slippery When Wet non stop while at work.

I also spent most summer nights playing games all night long, and even though as an adult the only thing keeping me from doing that is adult responsibilities, mentally, summertime is gaming nirvana. So, I don't have to explain anymore why a spiritual Castlevania sequel is 100% what I want to play all weekend. Know what else? I love popsicles. Summer is obvious high time for the treat and I'm probably going to eat more than I really should this weekend. I'm just having a hard time picking out what kind to add to my grocery order.

I'll be seeing Solo: A Star Wars Story Sunday. I've already got my tickets and am really looking forward to it. A new Star Wars each year is still amazing to me and even though I have to adjust to summer releases as opposed to the Christmas time releases of the past few years, it's still a high point for me. The wife is planning on cooking some BBQ to have ready for when I get home, so man, talk about the perfect day!

Speaking of the wife, we plan to do some shopping over the weekend and I'm really hopping to find a TF5 Hot Rod at Ross. He never showed at any of my Walmarts, and even though I managed to get both legions of him (thanks Shawn!) I also really wanted his deluxe toy. According to folks, he's been showing up at Ross lately, and even though I was just there last weekend, I'm sure I'll have no problem talking the wife into stopping by in hopes of scoring him. Sure, he's far from traditional Hot Rod, but I'm a big Hot Rod/Rodimus fan and like snatching his toys up when possible. Not to mention, I like the design. I like Transformer movie toys. I like Transformers. All of them.

So, needing a much needed break this weekend loaded with fun and quality time at home, I'm most ready to do this. It's a holiday weekend to kick off a summer full of robots, monsters, and misadventure. Which, is what the site is all about y'all. 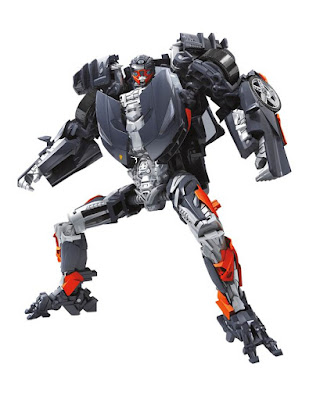