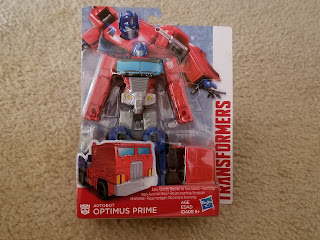 Optimus Prime in his larger Authentics toy, despite initial appearances in package, actually differs from his smaller counterpart (much more so than Bumblebee). One thing I'll point out in the picture, you'll notice part of his body isn't attached on card. Obviously owing to the budget needs of the card, there is some slight assembly needed. Nothing major, just snap that part on and you'll never have to remove it again. That part forms a back pack in robot mode and the front of Optimus's cab mode (his chest is a fake out). It actually snaps in nice and firmly on the robots back, though mileage may vary (individual cases may be different and that just happens sometimes). 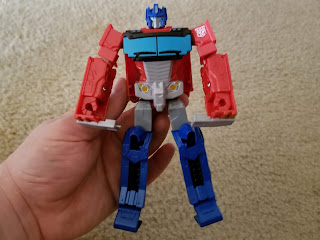 Optimus is a much more solid and satisfying figure. He has a decent amount of articulation and has some pleasant heft with just enough paint to make him look nice. Now like his smaller counterpart, his legs are hollow due to his transformation, but unlike his smaller version, the rest of him is solid. I was actually really happy with this guy as I was initially concerned that I basically just bought a scaled up version of the smaller toy. Though, I do admit, these larger toys do feel overpriced at $10 each. I'd say 7-8 would be a more fair price and probably what they toy would cost at a Walmart or Target versus a discount channel (where some things are just more expensive for some universe imploding reason). 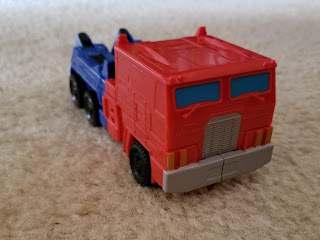 Of course Optimus turns into his normal semi truck vehicle mode, and like Bumblebee is very large and chunky making for a pleasant hand feel. The colors present in his robot mode aren't as dominate here. These are lower budget toys meant for children and it can really show at times. Much like an episode of Saved by the Bell. Just check out that episode where Mr. Belding's wife goes into labor in the school elevator. The elevator is very clearly a open door with somebody sliding as piece of cardboard. That's the level of compromise here. It's 100% adequate for it's intended purposes, though the lower budget is more clear at times.
Authentics evergreen Family Dollar g1 generation 1 generation one Generations Optimus Prime saved by the bell Transformers Zone Base