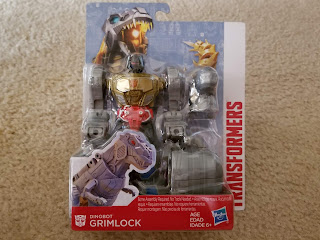 As far as the larger Authentics figures go, Grimlock is king. So far there isn't a smaller version, which I don't rule the possibility of out, so this was a completely fresh experience going in. Though like Optimus there is some slight assembly required and due to his transformation, his legs are quite hollow. Fortunately that's where the lower budget stops affecting the figure and what's left is a completely satisfying toy.

I won't lie, I was completely shocked by just how pleasant a toy Grimlock is. While individual experiences may vary, my Grimlock had pretty tight joints and really was exactly what I expected going in. Which was a generally traditional Grimlock. I do draw a few comparisons to his dinosaur mode to Goldran, but that can only be helped so much with similar alt modes and the general throwback nature these simpler toys have to older designs. Though it would make for a fun custom. 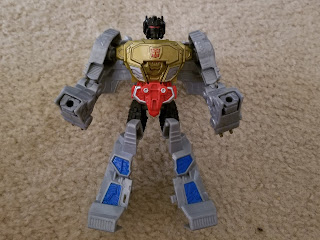 As I noted before that Grimlock's legs are hollow, they form his tail in robot mode. It actually makes for a pretty thick tail. Overall his dinosaur body is much more chunky than one would expect. Nothing wrong with that, it's just a fact. He's a sturdy big and chunky toy for a kid to stomp all over the carpet and 'RAWR' just often enough to border on cute and annoying. Like the other Authentics, Grimlock is all toy, so those going in for display pieces will probably balk at the idea of allowing such a simple to thing grace their shelves. Though if you like toys or outright have an affinity for the more random items (like I do), you'll probably be happy with this big silly thing (I am). 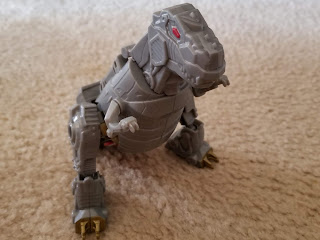