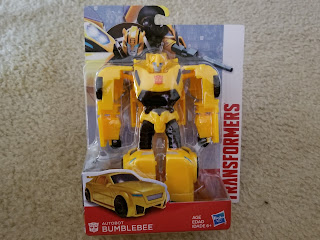 Unlike the smaller assortment of Authentics Transformers budget figures, I outright walked onto the larger assortment the other day. So I thought I'd take a individual look at each one of the figures. Unfortunately, I'm starting with the weakest of the batch. Bumblebee isn't much of a step up from the smaller figure, which itself wasn't the highlight of the assortment. 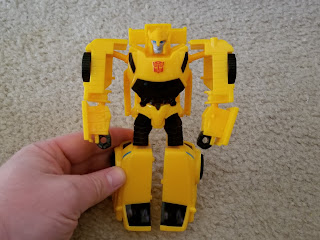 Bumblebee has a much more solid body, but retains the hollow arms. If I was to look right at him in package, I wouldn't be able to notice any real difference. That's a shame because they added elbow articulation and the added weight does give the figure some plesant heft. In fact, it's really nice in hand, even if it doesn't look like much more than a sized up version of the smaller 5$ figure. 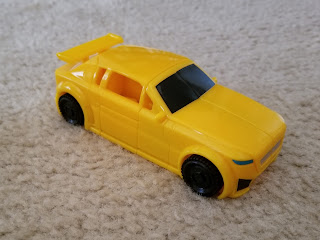 I wish I could do something more than constantly compare this figure to the smaller version, but it's really hard not to. The car is exactly the same, just bigger with some additional heft. Though the wheels didn't pop off so easily. It's a big chunky toy that's really pleasant to hold. There's no mistaking it for anything other than what it is. Which is a discount chain toy intended for children at a budget price. As neat as these guy's are, the display shelf types would probably pass out in shock if these ever came to their attention.

It was probably unfair to lead the way with the weakest of the batch (the others are super neat), I did so intentionally since the next post coming later tonight is much more flashy and neat. I try to make constantly interesting updates and leading off a series of posts with 'this one's not as great' isn't what I'm all about.
at May 14, 2018
Email ThisBlogThis!Share to TwitterShare to FacebookShare to Pinterest
Labels: Authentics, Bumblebee, evergreen, Family Dollar, g1, generation 1, generation one, Generations, Transformers, Zone Base