The Nemesis Prime version of POTP Optimus Prime has been floating around for a bit before earlier today when actual pictures of the toy popped up. Wow. Not only does he have new head molds for each modes head, he also has new accesories including his little pal Giza. Giza is a little robot bird that turns into swords. Yes, swords.

I already planned to get him as POTP is such a small line, I figure it should be easy enough to buy all the figures. But now... now... NOW there is an included Swordbird named Giza that is the entire selling point. 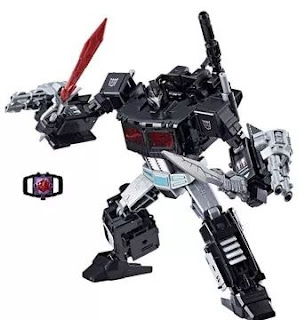