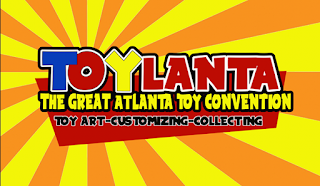 
Friday- After sleeping off my work night, the wife and I headed to the con getting there around 7pm for the opening evening activities. Roaming around the dealer area as it was being set up and popping in and out of the lobby swap I spent most of the evening with my friends Shawn and Stuart as we chatted about various things. Tons of toys were out and of course I didn't stop by the ATM on the way, so mental note for the morning: bring some cash tomorrow!  So far aside from some random G1 bots (and the mandatory Firecon purchase) I've spotted some great deals on kaiju vinyls and some great custom GIJOE that at least one must come home with me. Shawn gifted me with legion Hound and Dragonstorm, which was most awesome. We came home and ordered pizza on the way home for a great supper. Time for some sleep before a busy Saturday.

Saturday- Saturday started off well enough, we got to the show around 10am and roamed the dealer areas a bit before a run to McDonald's for some lunch. I managed to snag some Beast Saga figures and some Maximal symbol pins. After a Big Mac, we headed to the panel area for the Space Toys panel and it was a treat. I initially thought it was going to be a roundabout of all space toys, but was mostly about lines from the 60's and 70's ran very well by some well spoken gentlemen. One speaker that I enjoyed talked about his time trying to get stores to carry Star Wars toys by way of letter writing campaign

After the panel I met up with Dusty and we went over notes for our Transformers panel as we found Gabe, Mike and Alan. The Transformers panel went extremely well and I'm very happy with how it went. Afterwards we made a rush back to the dealers room where I caught up with Aaron and Tony where we talked about wrestling and the ROH ppv that took place Friday night. While in there I bought the remaining Beast Saga figures from the dealer I went to earlier. That had to be my favorite dealer, just a big set of tables with baskets full of various parts, pvcs, capsule toys, and random toys for great pricing. I plan to visit him again tomorrow to raid his bin of 1$ monsters.

Parachute drop went well, though wasn't as populated as before. Papi's Toys had several paratroopers in use including a Pretender Vroom equiped with a parachute. Surprisingly made for a good drop participant. Here was where my only complaint for the weekend has been. The hotel restaurant was renovating and had a temporary set up in the lobby. Which during a regular day wouldn't have been an issue, during a con was a giant pain. Not to mention, the diners were constantly bombarded by thr parachute dropped toys, so I'm sure they didn't appreciate that. Due to the overall sea of people my wife and I was seated for a table, but never got served prompting us to leave without eating. Though that was probably for the best as word was it wasn't very good.

I spent most of the day with Shawn, whom I shared a great conversation about Battle Beasts with at one point. Really glad he came, awesome dude to hang out with. Came home and ate the rest of the pizza from Friday night. One more day of the best damn toy show going.

Sunday- Sunday started off kind of rough as daylight savings time hit overnight throwing me off (really can we just stop doing this) as well as a headache I developed overnight. I took some medicine and fixed a simple oatmeal breakfast before heading out (the wife felt like staying home) stopping only for a can of Monster. It was rainy making for an interesting drive, but in all nothing too bad. Got in the dealers room around 10am and spent the next few hours with my friends Shawn and Stuart whom where heading out soon.

After they left, actually I missed Stuart leaving somehow (sorry man), I poked around for a little bit. Almost bought a vintage Pirantishead before deciding the Imaginext one I'm getting soon would suffice. I did visit my favorite dealer from the weekend and grab a Zenon pvc amd stop by the pin and sticker dealer to grab something for my wife. I decided to check out the custom cars one more time and head home (Sunday everyone is wrapping up and the show wraps up earlier).

Ran into Aaron and Tony at the cars and we chatted for a bit, they were heading out too. As we were chatting Gabe was coming in to get a little extra filming done for his school project, so we came in with him. Spent a little longer farting around with the guys and got a free bottle of Billy Mitchell hot sauce from the Southern Friend Gaming Expo booth who had been selling arcade marquee art and various oddities. I was super close to grabbing the Altered Beast arcade cabinet instruction manual. We headed talked wrestling a bit before all heading out. The great toy show had come to an end for the year and time to return to normal life. The rainy weather got me stuck a little in some wreck traffic. Passing some of the cars moved off to the side of the show, I recognized a few folks I had seen at the show over the weekend. Man, that had to suck.

Overall- Wow, what a great weekend. I've been having a pretty stressful time recently so this fun weekend was exactly what I needed. As fun as the Botlanta event was last year, it was a lot of work and it was a relief to return to the normal Toylanta. The RFC crew couldn't make the show, instead opting to gather for the weekend at Kilby's house for the weekend. Kilby sent me a portable recorder to make a podcast out of the Transformers panel. Unfortunately the recorder didn't show up until Saturday afternoon, so I regret not getting that recorded, though Gabe did film the bulk of it and offered to give Kilby the audio from that.

The hotel's renovation efforts was mainly a pain for the lobby as that's a main meet up area during a con and it was reduced that area greatly, not to mention had to be unpleasant for diners while trying to eat. Outside of that I really enjoy the hotel and talks of the show eventually moving makes me hope if and when that happens they'll find as good as a space to host the show.

As usual, I pretty much hibernate all day after the show, but also enjoyed some home cooking after a weekend of fast food. Absolutely had a blast and as always makes for great memories.
at March 10, 2018
Email ThisBlogThis!Share to TwitterShare to FacebookShare to Pinterest
Labels: battle beasts, beast saga, beastformers, Botlanta, convention, fandom, GI JOE, Gridman, Headmasters, Joelanta, kaiju, Microman, Micronauts, Star Wars, Superhuman Samurai Syber-Squad, Toylanta, Transformers, Zone Base