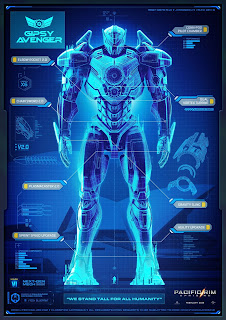 Earlier tonight, my wife purchased our tickets to Pacific Rim Uprising and boy are my arms tired. Mostly because of me flapping them around like crazy in excitement. I was a little peeved by the lack of listings at my local theaters to purchase them ahead of time, but then like a sudden Uprising of awesome all the theaters suddenly posted showtimes! We bought our tickets in what the theater calls 2D Extreme which I'm assuming means a better sound system, and that's totes ok by me!

My excitement is near catastrophic levels, I've been waiting for this ever since the sequel was first announced as Maelstrom. Pacific Rim when it hit in 2013 was the perfect storm and completely blew me away. It was like a religious experience, I was telling people about this movie I saw that was amazing. Going in a fan of robots and kaiju and witnessing an amazing big budget love letter to all things super robot, tokusatsu, kaiju, Saturday morning cartoons performed to perfection was a game changer. It took me awhile to accept that my long time favorite movie, Halloween (1978) had been knocked off it's throne in my head space. It had been so long that Halloween and Transformers the movie (1986) had occupied a shared ground in that favorite movie category in my mind that I ... had to come with terms with it.

So with the long awaited sequel coming (releasing tonight, but work schedule and you know, I can't buy things like movie tickets without a job) and my viewing Saturday afternoon (I'll sleep like 3 hours after work and drink a ton of Monster before seeing Gypsy Avenger punch a ton of monster) I am probably unbearable to deal with in levels of giddy.