Hey Force, I heard you Rescue 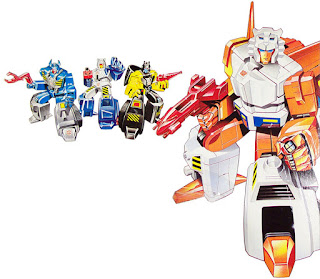 One of the more interesting teams in Transformers is the Rescue Force, a somewhat more obscure group that feature recolors of Lio Kaiser molds into new Autobot characters simply named after their vehicle mode. The four members can still combine, just not into a complete combiner robot. To me, personally, this is a perfect idea for some sort of box set. Reuse appropriate enough molds in the decos, give them more exciting names (there's literally a million good enough names already in the Hasbro registered book of names), and boom there's a cool batch of neato toys. Some cool fiction wouldn't hurt either.

I could see them as some sort of Autobot Sentai team that rapidly deploys in crazy situations. Say, for example, that there's a big Decepticon attack and somebody has to help evacuate the humans while Optimus deals with the situation. Welp, here comes the Rescue Force!
at February 14, 2018
Email ThisBlogThis!Share to TwitterShare to FacebookShare to Pinterest
Labels: Autobots, Europe, European, g1, generation 1, generation one, Lio Kaiser, Rescue Force, sentai, Transformers, Zone Base