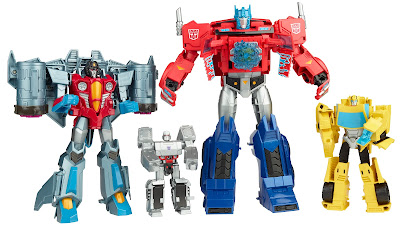 Earlier today, pictures of the new Cyberverse toys began hitting various TF news sites and boy are my arms tired. Mainly from flapping in excitement like a penguin trying to do kung fu dancing. With reports last week of Power Of The Primes winding down this year and the brand as a whole kinda rebooting in a more simpler direction (mainline and movie instead of two mainlines and movie) with a more traditional look and feel starting more and more come into focus as Toy Fair nears, these pics had good timing. I had already gotten my Authentics earlier this week, and my theory of them replacing Legions may just be true.

There's now Scout class replacing Legends apparently working as a middle ground of Legends and Legions that should sell for around $8. They're around the same size as the Authentics (I paid $5.75 each), which makes for a good value for those who may assemble their casts from the smaller more budget friendly lines. Then there's Warrior class costing $16, which is taking the place of Deluxe class (keeping the name from RID). Which so far look pretty pleasant. The Ultra class, which is taking the Voyager spot though costing $20 instead of $25. Then we have the Ultimate Class, seemingly taking the place of the former Leader class though now costing a very welcome $30 as opposed to the current $45 Leaders sell for at my local stores. There's obviously some simplification going in to lesson the costs and keep the toys more kid friendly, which I don't mind (I'm aware that these are toys that I buy).

I see myself buying more of the smaller, cheaper toys with an occasional bigger toy (like that very Skyquake looking Starscream). This is a direction I've mostly been heading towards the last decade, with only some amazing larger toys throwing a wrench in the works. The Prime Wars trilogy has been impossible for me to ignore, so I've been going crazy getting as many as possible. I look at this line, the upcoming cartoon, and can see myself having a really good time.