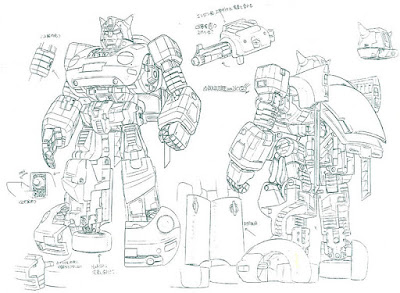 Back before Bumblebee was forever a hatchback (or Camaro, beep beep) there was an honest attempt at making him a Beetle in the Alternators/Binaltech line. Though Volkswagen didn't want their products associated with war (anymore) it never made it past conceptual art and as his body in a BotCon comic appearance. There was talk for awhile of making him a Mini Cooper which for the life of me I could never understand. Sure, other characters all day, but Bee? I find the sporty hatchback a good alternative. It's similar to the Beetle design, while still up to date, and lends itself to a very unmistakable classic looking robot mode.

You know, I really liked Alternators. They weren't really good toys, though they wasn't intended to be. They were intended to be pretty things to put on a display shelf before Masterpiece was a thing (it was just Optimus with a repaint as a cab mode Ultra Magnus... and a Brave guy). There was even comments from the Hasbro design team at OTFCC at the time that they intended them to go along with the Masterpiece Optimus Prime. Some fans derided them at the time (those magical ones who seemingly hate anything everyone else likes coincidentally...why do people keep giving these guys a platform to be heard?), but mostly everyone liked them. They were a nightmare to transform, but were really sharp looking robots. That initial Smokescreen toy is still one of the sharpest looking Transformers toys I've seen to this day.
at January 02, 2018
Email ThisBlogThis!Share to TwitterShare to FacebookShare to Pinterest
Labels: Alternators, Binaltech, BotCon, Bumblebee, masterpiece, Official Transformers Collectors Convention, OTFCC, Transformers, Zone Base