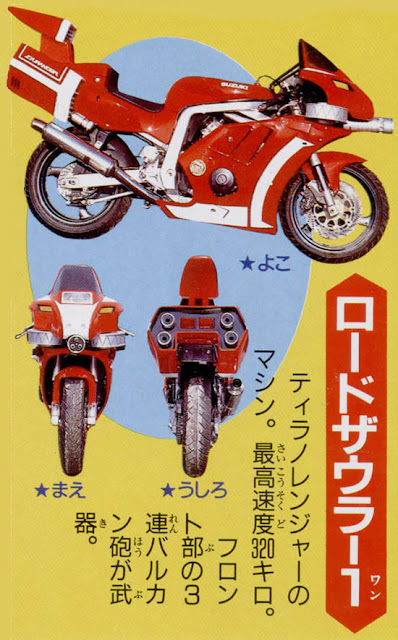 In the past few months, I've been increasingly becoming a bigger and bigger fan of the motorcycles the Rangers used to travel about. They were more heavily used in Zyuranger, as the Zyurangers main mode of transportation to wherever a monster might be causing havoc. Regardless the series or name they've went by, they're completely badass. 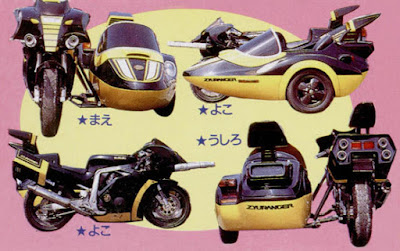 There's something poetic about a motorcycle that looks like a dinosaur, packing firearms, and being used by superheroes to drive around looking for monsters to beat up. I'm not even much of a motorcycle person. I'm not even much of a car guy. I just want something that runs good, gets me from point a to point b, and I'd like it to look nice. Which is ironic considering my hobbies revolve around robots that turn into cars and the like. 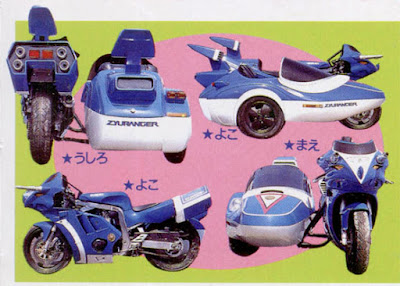 So far I have the black battle bike from Imaginext with hopes to score the blue one as well. I wish there was a red one, but I suppose a boy can only dream. So far Imaginext has only made the two bikes with sidecars. I sometimes aspire to acquire a stand alone Imaginext motorcycle to customize into the Red Rangers bike. Though I'd much rather an official one. I know there's other Ranger toys versions of them, but hey... Imaginext has pretty much cornered the market in Power Rangers toys.
at January 20, 2018
Email ThisBlogThis!Share to TwitterShare to FacebookShare to Pinterest
Labels: battle bikes, Imaginext, Mighty Morphin Power Rangers, Power Rangers, roadsaurers, Super Sentai, Zone Base, Zyuranger