Awesome in the Machine 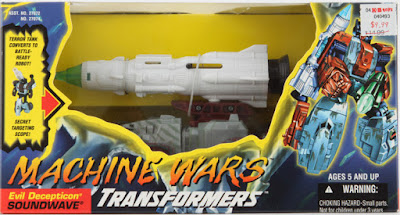 I really liked Machine Wars. Sure the molds were reuses of Euro G2 and some unused G2 with nothing original made for the line, but long hair don't care I dug it. Just a neat anomaly in the Transformers world. Beast Wars was in full steam when this line was tested out at Kay Bee's (some folks swear to have seen them at Meijers and maybe they did) judging if vehicle based TF's would still sell (it didn't do well, to a beast naysayer's nay saying). Lot's of folks like to say Machine Wars was in response to a Kenner employee misspeaking at BotCon essentially causing the line. I don't necessarily agree with that. I mean, sure it's possible (I'm not one of those robot nerds who thinks he knows everything), but it's a little hard to fathom why a toy company would sink the small fortune to release such a line just to cover a mistake an employee said to a relatively small amount of people (in a time when not enough people had the internet to really spread the information). I'd imagine Hasbro/Kenner (remember when Kenner made Transformers?) would just move along like nothing happened and if questioned would just say the employee was mistaken. I like to think the employee was directly speaking about what Machine Wars turned out to be and probably just worded it badly or it was interpreted wrong (I mean, people do make mistakes).

Of course that's just me theorizing and only folks employed by the involved companies know the actual truth. Regardless, it was a super neat line. I always have and still really do like those old classic boxy Transformers toys and just overall thought it was neat. Machine Wars toys had these pretty great decos that were not traditional on mostly traditional characters. Not to mention that packaging just screams out to me. Those colors man, there just not what M&M kept babbling about when they found him, they're a real visual treat on that box. I always found the budget of the packaging hilarious. They essentially reused box tooling they had and made the toys fit inside them and doctored up some existing art (in some cases of not the same toy) to match the new characters inside.

Most of the molds found themselves released in other colors and as other characters in other lines, but there's just something special about that little series in the blue boxes to me.
at January 22, 2018
Email ThisBlogThis!Share to TwitterShare to FacebookShare to Pinterest
Labels: beast wars, BotCon, g2, generation 2, Hasbro, kay-bee, Kenner, machine wars, Transformers, Zone Base