Power of the Primes Dreadwind 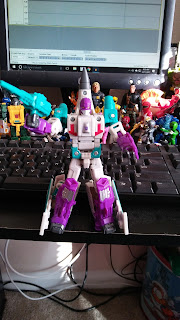 My wife gave me a Dreadwind the other day. I've been on a buying restriction until after Christmas as she doesn't want me to buy anything she might get me. Though finding recent Power of the Primes toys that I wanted, I guess she decided to give me one early to tide me over. 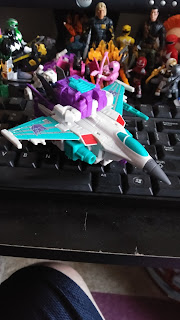 Dreadwind is a great toy. Like other POTP deluxes, he's a throwback to Combiner Wars toys. He can form both his modes as well as an arm for a combiner form. 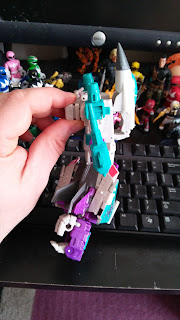 Since Primemasters don't form heads for the bots, the way they interact is a bit different. A Primemaster in its shell homages Pretenders, but out of it's shell homages a Powermaster.  POTP deluxes hand/foot bit doubles as a method for merging the Primemaster and the Transformer. 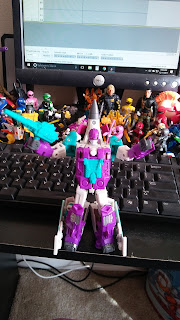 It looks a bit clunky, and basically gives the robot a beer gut. Though it isn't bad and is a neat way of using the hand/foot part (though I didn't mind the giant weird gun from CW). The part has a little dummy panel to cover the hole where you'd place your Primemasters to create a Primemaster mode. As I don't have any Primemasters yet, I substituted a Titanmaster to get an idea of how it works. 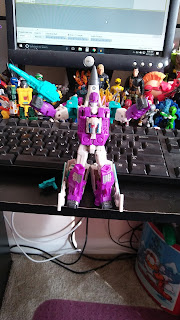 Of course the difference would be a neat rune looking bit giving the robot super powers and not a screaming face in it's chest crying for an end to this horrible life. The hand/foot bit can also be attached in vehicle mode, which on Dreadwind looks like one of those sound box things from G2. Which I don't hate.

So far I'm very pleased with my first experience with a Power of the Primes toy. I'm looking forward to getting more (after Christmas of course... or on... now I'm curious about what's in those packages under the tree) and enjoying the newest incarnation of my Transformers. My only gripe so far s that I wish a Primemaster could drive a larger toy like in Titans Return. Though I believe they can in the Legends and Leader figures. It's a nice combination of the gimmicks from the prior installments of the Prime Wars trilogy and so far looks like a good way to end it.
Combiner Wars Combiners Dreadwind Generations POTP Power of the Primes Powermaster Pretender Pretenders Primemasters suer robot Titanmaster Titanmasters Transformers Zone Base