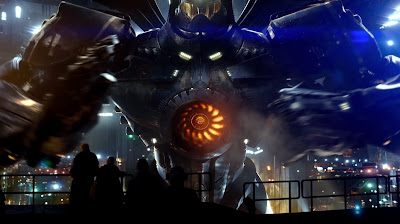 So, Pacific Rim is my favorite movie. I love it. It's a wonder super robot Saturday morning cartoon come to life. With Pacific Rim Uprising coming out just in time for my birthday, excitement is an understatement. A recent conversation in Toku Legion about the possibility of a Universal Studios ride based on PR as Uprising is a Universal Pictures release. The fact that Terminator 2 3D is closing to make room for a new experience based on a 'exciting Universal film franchise' completely inspired me to dream up an attraction based in the Terminator show building in like 5 minutes. I think we all are confused as to why I'm either not employed by one of these companies or locked away in an asylum drawing robots on the wall.

Using the Terminator 2 3D set up, I can see the entire thing being a Shatterdome facade and the Pan Pacific Defense Corps putting on a demonstration for new investors or political visitors (which are you, the guests) in the Jaeger program. The rising stage areas that once held the live action Terminators could present Ranger suits at a point in the presentation. The placement in the theater screen could be where live actors walk in and out the 4D movie going on interacting with the Jagers on screen moving about. The 3D video combined with the sensory additions from the theaters moving seats, lights, and other effects would really play up the experience of looking at Gypsy Danger in the face as it moves about.

Just as things are going smoothly, we have a breach and a kaiju is attacking... ORLANDO FLORIDA! We are then treated to a visual spectacle on screen as the Jaeger fights the kaiju complete with all sorts of 4K tricks. Seats bumping around. Fire, lights, 3D video, (what if the kaiju had banana breath?), you name it. Finally Gypsy Danger kills the kaiju in a messy splatter of blood as we get sprayed by water in the seats. The PPDC then addresses us and the show is over. As we leave the Shatterdome, we enter a gift shoft that of course has all our Pacifc Rim needs available.