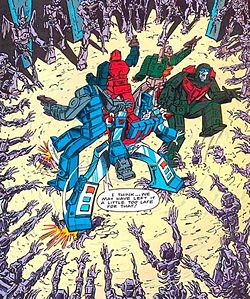 I've made the joke before "what doesn't Halloween have to do with Zone Base?", meaning it's all to obvious how horror themes are rampant in Transformers and other similar series. I mean, most of this stuff revolves around a monster of the week. Then you add in the fact that Transformers are robots, and writers get downright morbid. It's like there's a free pass to get as violent as possible.

The point I'm making is that this stuff can be scary, horrifying, and violent without pause. Take the Transformers UK story City of Fear (you can easily find reprints of it physically or digitally, and I recommend you do). In this story, we get a traditional seeming Transformers story start off and evolve into a zombie b movie. It's weird, scary and even has the nerve to use a dead character from a previous story as a zombie and outright does so to intentionally drive the story forward.