Look what came in the mail today! 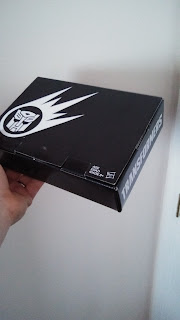 No, not one of those 5$ Taco Bell meals

Thanks to Kilby picking me up one at Hascon last weekend, my Titans Return Arcee set came in today. Inside the shipping box was a rolled up poster that I haven't looked at yet, a new RFC staff badge, a Hascon branded can of Play Dough, and of course the Arcee set. Long time Transformers fans know Arcee was made a Headmaster in the Rebirth and we've all heard Don ask for one for over 20 years at BotCon. Titans Return of course being a return to the Headmaster gimmick and well... they actually made the Headmaster Arcee. Arcee is a reuse of the Blurr mold with a new head. The new head is Daniel as a Titanmaster (spelled backwards so they can trademark it) and even resembles his exo suit. Also included with the set is a diecast Titanmaster Ultra Magnus. The box is really neat and not what I expected. I saw images online and just assumed it was a box with the figures inside. If I would have read more, I would have saw it's actually a fancy unfolding contraption that displays the toys, the art, and their collector cards quite nicely when you unfold it. It's a super nice set, and I could happily live with more exclusives packaged in this manner. 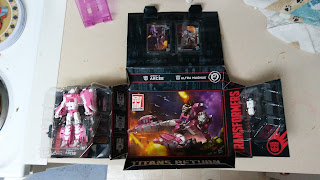