Gutcruncher shares the Decepticon's dream of total defeat of the Autobots, but for his own reasons. He has a contract with Megatron to trade their remains to the Junkions and other interplanetary spare parts dealers for vast quantities of energon cubes. This cold, calculating capitalist views all opponents as potential profit. He pilots the space-faring Stratotronic Jet, which has a maximum speed of 40,000 mph and is armed with fusion bombs, two cruise missiles, particle beam, infrared laser guns and more. It converts into a devastating battle station with missile launcher and fusion blaster cannon. Also includes pilotless surveillance drone and one-man battle tank. 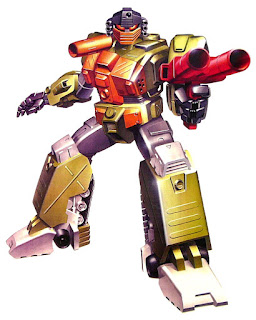