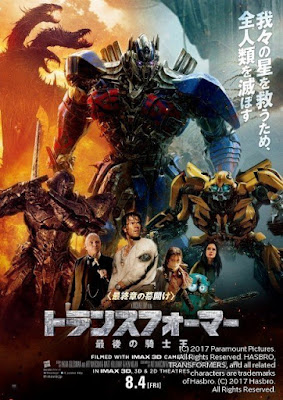 The fifth and newest Transformers live action movie is playing in theaters now and boy is it's arms tired... wait.

Transformers: The Last Knight (TF5) is a legitimately enjoyable Transformers live action film. It follows in the trend that the odd numbered ones are the better ones (look, it's my theory and I've been right so far) which bleeds into a new thought process of mine. The even numbered ones serve as a bridge. Transformers 2007 (TF) is an introduction. Between TF and TF3 the only thing that matters is a explanation as to Megatron's return and introducing a brief bit of mythology. In TF3 we get a big info dump and things got apocalyptic, so much so that years later in TF4 we see that Chicago is a wasteland and the government is now hunting down Transformers. Megatron comes back and we get a new focal point human. That's literally all that we keep going forward into TF5 where we get another info dump and things get apocalyptic. Next year we get the Bumblebee movie which I'm taking as a side story and not part of my odd numbered better, even numbered are bridges theory.

What do I call that theory? Even bridge to odd high five?

I'm about to go into more details about this movie and since it's going to have spoilers, I'm going to hide the rest of the post behind a cut (click the read more link). So if you're on the mobile version of Zone Base or a link and the cut doesn't work, there's spoilers after this pic. 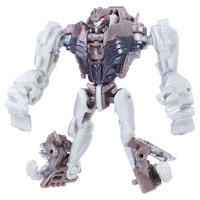 TF5 is a solid Transformers movie that runs our favorite bots all over Earth and even space in an epic adventure that feels like it could have been a season or miniseries story arc. Unfortunately, cramming all that story into two and a half hours causes my biggest problems with the movie. It has pacing issues that really affect the movie at times. Some scenes go by lightning fast, while others go by at a more natural pace. This leads into the other major problem in the movie, you get either too much explanation, not enough explanation, or none at all.

As for an example of going to fast, there's a scene where our main humans and Cogman are escorted to a docked submarine by Anthony Hopkins. The scene then jumps to the military in their surveillance area saying the submarine jumped into the water and the submarine is a Transformer. We then go back to the gang and the submarine. Later on the way home, my wife asked me what happened there, she didn't catch the line from the military. Even though I did clearly hear the line and fully understood, it was extremely rushed and just awkward.

As far as too much, they really spent a lot of time driving in the King Arthur stuff. Seeing as it was a key point, that's not a fault. Though with all the rushed parts, you can see where it makes for an uneven pacing and making things fuzzy. There's some parts we are left with no explanation whatsoever. Somehow Bumblebee can reassemble himself. Just magically put himself back together after being dismembered more than once in the movie. No insight. He just can. Not to mention his voice comes and goes. Just does.

Remember that King Arthur stuff I talked about earlier? Well the female lead (I've forgotten her name, but I remember she played Starlord's mom) is the last descendant of Merlin who was given a staff by Cybertronians that just happens to be the thing that plugs into Cybertron and now Cybertron can somehow can drain Earth of all it's energy and reinvigorate Primus. Oh yeah, Unicron is either inside or is Earth. His horns are slowly popping up all over the planet.

That sure was a cluster of words huh, get my point now? That's how the pacing and the way it creates the information flow harms the movie for me.That's my major beef with the movie. Small issues with the crazy amount of cursing (not that I am offended, it's just a ridiculous amount that just feels dumb...let's not forget the negative aspects of that with children buying toys of the movie) and Mark Walberg's dialog. Marky Mark is usually a good actor, I just can't buy him saying these lines. Just like TF4 he either is a bad ass or a naive man child, but never really there.

Fortunately, the movie is still enjoyable with those faults. The story is a grand adventure starting in the wastelands of Chicago with the TRF (the Governments anti Transformers force that uses Mech Warrior looking mech suits to fight Transformers), to Decepticons fighting Autobots all over a city, to Cade and Bumblebee going to England where we learn about the Transformers adventures throughout Earth's history. From there the adventure goes deep undersea to find a lost Cybertronian spaceship, which rises as Cybertron comes to attack Earth due to the actions of Quintessa. Quintessa, who earlier in the movie brainwashed Optimus Prime and changed him into Nemesis Prime that she sends to take that magical Merlin staff. Optimus regains his senses and leads the troupes to stop Quintessa, Megatron, and Armageddon.

The Transformers display the most character they've ever displayed in the live action movies as even characters that are only in the movie for just a few minutes are full of life and personality. The action is more clearly choreographed and there isn't a moment that gets lost on screen in these battles. Cogman is hilarious, and Barricade is awesome. In all, this is a very enjoyable and despite it's faults, a very solid entry in the Transformers live action series. It gives me hopes for the following moves to continue to go forward with the more Transformers focused stories as well as more space opera plot lines. Overall, it's a welcome addition to the Transformers fiction.

With shiny chrome.
at June 25, 2017
Email ThisBlogThis!Share to TwitterShare to FacebookShare to Pinterest
Labels: age of extinction, dark of the moon, Michael Bay, revenge of the fallen, the last knight, Transformers, transformers 5