A few years go Miniforce started showing on Korean tv. I've been watching the clips online for some time and was overjoyed to discover it was put on Netflix just recently (June 1st to be exact!). So I put my watch through of Attack on Titan on pause (eventually I'll watch it all) and immediately began my binge (add to list, check).


The show is also on Youtube if you don't have Netflix. Being on Netflix though gives me hope that the toys will be released here in the US and potentially easier/cheaper to get. It's the same kind of hope I give that eventually the super cool Tomica Hyper Drive heads (man, they are cool and expensive) will find it's way here. Being that Super Wings is on US tv and it's toys are now on American shelves, I don't think it's too much of a stretch to hope to see these guys at my local Toys R Us. 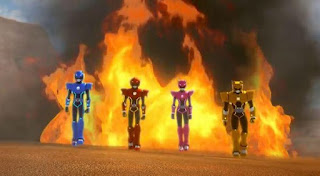 The show is obviously aimed at smaller children. Each episode is about 13 minutes long, so you can really watch a bunch of adventures in no time. The Miniforce is a gang of smaller animals who spend the first few minutes of an episode being silly at home with their human companions. Shortly after the episode starts we see where the bad guys have sent the monster of the week, the gang changes into their Invincible Miniforce forms and rush off to battle. From there the show is an action packed animated Sentai/Super Robot show. When the big Mechamon of the week is turned giant, they call upon their Forcecars/Transcars to take them out. 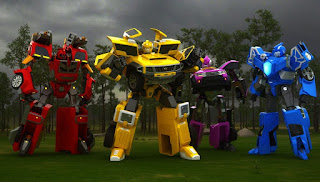 The Forcecars are sleek vehicles that transform into larger robot modes and can even combine together to battle the larger threats. In all honesty, if the younger demographic cares you away from this show, it's really just in the opening of each episode where we see the gang at home. Once the action starts, it would probably be easier to swallow for you. It's a fun, albeit silly show that I dig 100%.

Between odd clips, discount DVD bins, and random toy finds. I've developed a casual interest in Korean robot/sentai shows that I'm happy to divulge in as the means to enjoy them becomes more readily available. With Miniforce getting a more mainstream push being now on Netflix, I hope it continues.
Posted by Rob at June 12, 2017