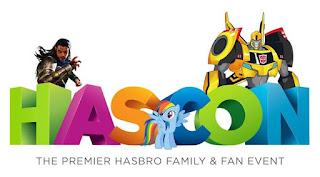 Earlier today I was having trouble getting to sleep, which worked out as Brian Kilby texted me to check the RFC mail list. We had gotten the press release for the new official convention (replacing BotCon) known as HasCon.

I was kinda blown away.

So this fall, HasCon will host events not only for Transformers, but also My Little Pony and other Hasbro brands. That's kinda a deal maker as whenever I go to these shows, my wife is pretty bored. But here, she'd be able to enjoy the MLP stuff. Making for a better time for the both of us and not just me.

Also in the email was news of the upcoming new Fan Club to replace the ending one ran by Fun Publications. I'm a sucker for a fan club and even more for an official fan club. I can't help but to wonder how it would operate and how things would go. I generally liked the former club magazine and hope we get some sort of newsletter. Hopefully the new club would have some sort of membership exclusives.

I'm super interested in what's to come of this new show. It feels weird to have watched 2 incarnations of official Transformers conventions open and close. This new show is almost like a comic con based on Hasbro characters. Considering all the properties they own, I'm not against that.
at October 19, 2016
Email ThisBlogThis!Share to TwitterShare to FacebookShare to Pinterest
Labels: BotCon, con, convention, conventions, fandom, Fun Publications, Hasbro, HasCon, MLP, My Little Pony, Transformers