There I was, late July 2002 sitting in the lobby of a Holiday Inn in Fort Wayne Indiana. It was Friday morning and I had driven overnight for BotCon. I had planned on driving the 10-12 hours from Atlanta over night and sleep a few hours before pre reg pick up. I didn't count on getting there too early and having to wait for my room to become available. So there I was sitting in the lobby, half napping, half playing my Gameboy Advance. Eventually more people started pouring into the hotel and before I knew it, some friends from Transfandom/TFW2005 (before they split up) had plopped down next to me in chairs. We all were super excited for the weekend and chattering away about what we hoped the exclusives would be.

You see, back then, it was a mystery.

That's right, back in the old days, the BotCon exclusives were a mystery. You could wait until the con to buy them, or buy them at pre reg blind. If you didn't like them, there was plenty of dealers willing to buy yours on the spot. The most you had for a clue was a rough size hint on the pre registration form.

It was super fun.

Well, in 2002 things were changing. Instead of the usual one or two exclusives, there was four. That's right, before the 10-15 exclusives of the Fun Publications days, we only got one or two. So four seemed insane. Let me break it down for you. This year there was a pre registration exclusive. Then, as the current comic publisher wasn't happy with 3H selling comics, they sold a small exclusive that came with that years convention comic. Then after that you had the traditional large and regular sized exclusives. Also for the first time, we all knew who the large exclusive was going to be. 3H had shown him off in order to get more fans to the con.

So, going in we knew the large toy was Cyclonus made from the Beast Machines Ultra Class Jetstorm toy. Which still left the other three a complete mystery. To add to the fun, there was two different con shirts that year and if you bought one during pre registration, it would be a mystery as to which one you got. Of course you could buy the other one at the show (and I did).

After I got my room and a nap, I met my friends from the lobby to go to pre reg pick up together. We were all staying at the Holiday Inn, the second hotel with a convention discount rate, but also about two blocks away from the con center. So we had a short walk ahead of us. We got in our respective lines (separated alphabetically by last name) and picked up our pre reg kits.

We were given our shirts and a small box with all out con materials inside including the pre reg exclusive. The other three were available for pick up at the Friday night dinner for those in attendance, or Saturday morning for everyone else.

The shirts were either Optimus Prime or Megatron decorated with neat art of their various bodies on the back. I got the Megatron (and totally bought the Optimus shirt the next day). The pre registration exclusive was Tap Out! Made from the recent Cliffjumper keychain toy in a neat green deco. I was ecstatic over Tap Out. I was a big fan of the keychain toys that were released months before the show.

They were reissues of the classic Bumblebee and Cliffjumper toys with a small plastic loop molded on allowing for a keychain to be attached. With this in hand, we all decided the small toy with the comic had to use the Bumblebee keychain mold. Also inside the little box was all sorts of goodies including an Optimus Prime sucker (I still have it, good thing it's wrapped in plastic... yikes) and also a neat art print. My friends got Skywarp, but I totally got Tigatron. They were all jealous, as they should have been.

There was also the convention guide book inside, which on it's cover had what one friend decided HAD to be the other exclusive. You see, the cast of Robots in Disguise (the 2001 series) were all guests and the guide cover reflected that. Each actors characters were on the cover... but for some reason, Prowl was purple and black. This wasn't too much of a hint to the rest of us, but that one guy swore we were definitely getting this.

I mean loudly. Very loudly. We were in the Burger King and there he was screaming over and over, "GUY'S, IT'S TOTALLY IT, IT'S TOTALLY IT, OH MAN IT'S SKYWARP FROM PROWL THATS WHY THE PRINT WAS IN THE BOX, GUY'S THAT'S WHY!"

So we had to leave Burger King and eat at Rally's and he had to chill out, which he didn't. He went on and on and on. Later as the dinner went on, we went down to hang out at the con center with the other non dinner attendees and tried to hear what was going on inside. Those in attendance were given free Armada and Heroes of Cybertron toys and a showing of the pilot episode of Armada was shown.

I wasn't too jealous of the toys, because they had already been showing up at stores. I was jealous over the Armada showing as it wasn't due for air for a few more months and I was eagerly looking forward to it. During the dinner, 3H revealed what the exclusives were to much applause. We didn't get to hear what they were and headed out to join in the parts parties.

Over the course of the night, I heard that there was a Cheetor in Jetfire colors. I also didn't pay it too much attention as that just sounded ridiculous.

The next morning I stood in line to get my exclusives, still mostly clueless to their identity. Then one of my friends stopped by to show me one of their con exclusives. It was CatSCAN! 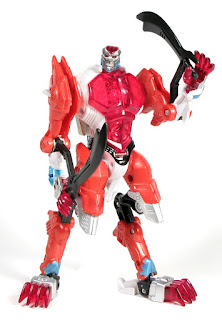 Made from the Beast Machines deluxe Nightslash Cheetor in RATCHETS COLORS, in a pretty neat box that was made to resemble a small laptop, CatSCAN was pretty cool. In fact he remains to be one of my favorite BotCon exclusives. The small comic toy turned out to be made from the Bumblebee keychain as we predicted. In a cool metallic blue, Glyph was a really nice looking mini bot!

Now, about that Skywarp Prowl toy... it of course never happened and that friend didn't really hang around us for the rest of the convention.