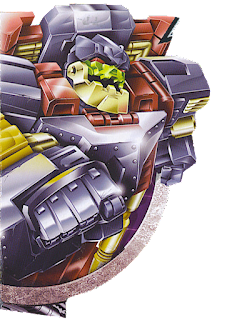 With dark power coursing through his circuitry, his might in battle is nearly unmatched, but Dark Crumplezone is just as dumb as ever. Being dead gave him a mean streak a mile wide, and getting put back together by the otherworldly power of Galvatron gave him the weaponry he needed. What he can't smash through, he knocks down, and what he can't knock down, he pulverizes with his forward plasma ejector cannons. He's too dumb to be a real threat to the Autobots, but Galvatron is content to just set him loose on the battlefield and see what he can blast before the Autobots shut him down.