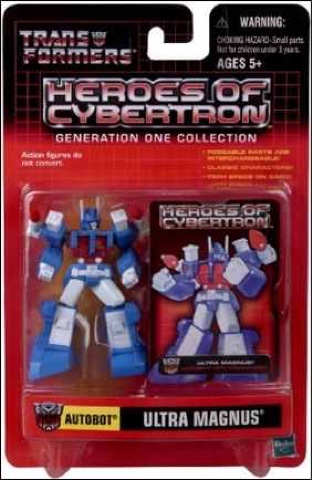 When these little pvc figurines of my favorite robots first came out, it was as a Japanese blind box line called 'SCF' (Super Collection Figures). They were great, each series payed homage to a different season or series in the G1 era cartoons. You could get them pretty easily online, at conventions, or sometimes local comic/anime shops. Each series would have an even number of fully painted or chrome/clear figures. There was chase figures that were hot commodities, and even build figures in some series.

It was a really fun little line to collect and it wasn't just the hardcore Transformers fans buying these. Toy collectors, cartoon fans, and general pop culture enthusiasts were hot on the trail of these great little figures.

It's not hard to imagine why Hasbro quickly brought them to the U.S. as Heroes of Cybertron. The figures were sold on traditional j card packaging with a trading card inside. Sold at specialty stores and smaller retailers (pharmacies, dollar stores, etc.) for a relatively low price, these little toys were a popular item. The fandom took time to locate what chains they could be found at and spread the information fast. In my area, the best place to get them was Walgreens.

Funnily enough, I had never stepped foot inside one before.

Walgreens had recently started popping up all over my area and had my interest, but of course it took the allure of Transformers to get me to walk in.

This turned out to be great. I loved the stores and many were 24 hours. At the time, one of my favorite pastimes was going on late night toy hunts to stores that were open 24 hours a day. Now I had another option and it had it's own type of toys to be found. I quickly learned that Walgreens generally splits up cases of merchandise across stores in each district. So to get an entire series, you really had to hunt.

Which wasn't so bad, as they were everywhere.

There was even some OTFCC exclusive Heroes of Cybertron figures available (that I snapped up!) and the line went on for a little while. It certainly was fun collecting these little bots in both Japanese and American assortments. There has been similar series since, but so far none have been nearly as fun to chase down.