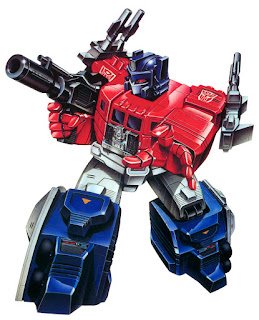 One thing that gets asked a lot is, "What's your favorite Transformer?". When we're talking about characters, I could go all day. But if we're talking toys, my number 1 has always been and will always be, Powermaster Optimus Prime (PMOP).

It's quite hard to put my finger on exactly what it is about good old PMOP that I love so much. The fun toy, it's amazing look, it's play features, the great way he was introduced in the comic. The reasons keep mounting, and I keep on loving this toy.

As an aside, when the Tommy Kennedy focused episodes of season 5 would come on (Sunday mornings here), a live action puppet of PMOP would host the episodes (repackaged reruns of the prior seasons) by telling a young Tommy Kennedy about his adventures fighting the Decepticons. I would get out my PMOP and have him next to me as I watched the show. 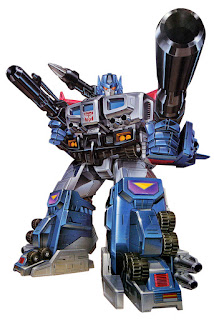 A little later in life, as a teenager learning how to use the internet, I learned about Transformers Masterforce, one of the Japanese Transformers cartoons. Masterforce featured Pretenders, Headmasters, and Powermasters (called Godmasters in Japan) in a fun and unique cartoon.

The eventual star of the show, Ginrai, was a reworking of the PMOP toy mold as a new character. He featured die cast parts, fancier arms in super mode, and a additional trailer. The additional trailer was a smaller Autobot named God Bomber, who not only had his trailer mode, also could become armor for the super mode, giving us God Ginrai.

As I was young and hardly had any money, I wasn't able to buy myself a Ginrai to match up with my PMOP until a few years later. Luckily, a commemorative reissue was released and I was able to get a God Ginrai of my own. Not terribly long after that, a reissue of PMOP was released as a Toys R Us exclusive. The toy was a straight repacking of the God Ginrai toy, changing God Bomber and God Ginrai to Apex Bomber and Apex Armor Optimus Prime. Needless to say, I was also an easy sell for that, 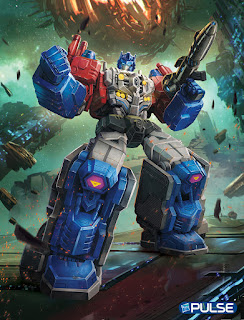 There has also been various merchandise of PMOP and Ginrai. Most notably from the SCF and Heroes of Cybertron lines I spoke of in an earlier article.

In early 2016 (this year), Hasbro unveiled the newest incarnation of PMOP to be released. Still carrying the classic name, PMOP is now a Titan Master in the upcoming Titans Reurn line, due for release in summer.

In this new toy, Optimus bares a striking resemblance to his Apex Armor form and is now a Titan Master (a gimmick similar to Headmasters, though with a throwback to Micromaster cities mixed in for good measure).

Personally, I'm very excited for this new figure and will most likely go crazy hunting one down. Takara has teased the idea of a Masterpiece PMOP/Ginrai, meaning a super high end version is eventually on it's way. I've always hoped for updates of this toy, and now they're constantly bringing out more PMOP. SOmething I'm more than happy to see.
at April 18, 2016
Email ThisBlogThis!Share to TwitterShare to FacebookShare to Pinterest
Labels: fandom, g1, generation 1, Hasbro, heroes of cybertron, SCF, Takara, tf, toys, Transformers