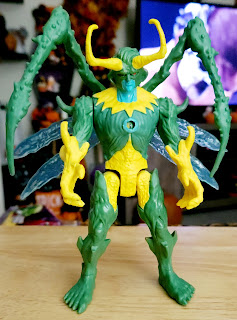 To be honest, I generally haven't cared much about Loki. Sure, he's a fun villain. It's hard to ignore his charm and he's pretty likable in the Marvel movies... but I generally don't pay him much mind. It's just me. Then this wonderfully awesome version of him was released in Marvel Mech Strike Monster Hunters and I was instantly sold. I've been singing the praises of this wonderful little line since being introduced to it and Loki is a great reason as to why. Like with the other bad guys in Monster Hunters, Loki is firmly a monster. The magical Eye of the Kraken combined with super villain science has turned him cool insectoid creature.

The figure is larger than your standard Monster Hunters figure, maybe 6". He has neat dragon fly type wings that move with the push of a back mounted lever. The same lever opened his chest mounted eye. Like I've said before, it's Lovecraft without specifically being Lovecraft. So that's the Eye of the Kraken. Different ancient evil. Aside from the wings, Loki has some big pointy bug legs that unfortunately don't move as far as I can tell. I say that because as soon as this goes up, somebody will figure out how to properly operate a child's toy. Articulation I can figure out immediately is his basic head and shoulder articulation. Loki's legs move at the waist, but are on more of a universal joint that gives a bigger range of motion that the basic swivel joints of his legs and head.

Visually he looks like classic Loki... if Loki was a giant bug monster. It's not much of a stretch to compare him to a Power Rangers monster... and these toys are at the perfect size and scale to pair them up with current Hasbro Power Rangers toys. Like I've said, there's definitely a tokusatsu vibe going on here. Certainly not something I'm going to complain about. Clearly he's meant to be paired up with Thor (whom I'll cover here later), but would be a monstrous foe for any of your Monster Hunters to fight. Or even your Power Rangers. He's a cool, solid feeling monster figure based on a classic comic villain. Pretty hard not to find that great.