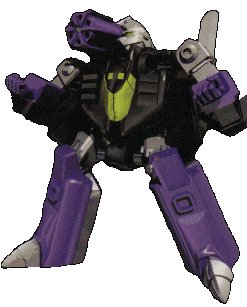 Though large of form, however much matters are betrayed by Starscream's orders, he responds only with the single word "Roger" and carries out his duties faithfully. There may be some fateful trauma between the two. A rarity among the Destrons, he is a reliable soldier who has restrained his eccentric side. He can launch in rapid fire the Screamwinder missiles, which he shares with Starscream, from his BB Launcher.