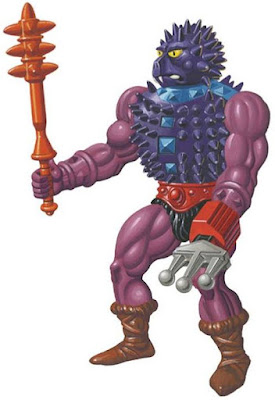 A couple of months ago, my mom called me. She was at Walmart picking up a few things. They had some MOTU toys and she asked me if I wanted Moss-Man or Spikor. "Spikor!" I said with excitement, I wasn't aware he was available. "But he's stupid looking?", she said. Clearly, Mom didn't appreciate the glory that is Spikor. Speaking of glorious, ever have a Kinder Bueno with a cup of coffee? Absolutely wonderful.

Spikor is a member of the Evil Warriors that as you can see, is covered in spikes (not sure if the name gave that away). He may look like a porcupine, but that's actually his armor. In newer fiction it was revealed that the armor is magically bonded to his body making him a walking wall of spikes. He may look silly, but you try punching that. Spikor also has that trident for a hand. It's obviously handy (lol) in combat and depending on who's writing, can shoot lasers. When used in tandem with his mace, Spikor's a pretty big threat. Fortunately in the cartoon, he's an idiot.

Of course all the Evil Warriors are idiots in the old cartoon. A running theory is that the producers of the show dumbed down things to make them not as scary for small children. I've talked about how He-Man and his gang were often in the cross-hairs of the Satanic Panic groups. It's not hard to see looking back where they were coming from, MOTU is pretty line crossing at times. Spikor is essentially a walking Iron Maiden that works for a skeleton faced demon. That's a little harsh for a 6 year old.

Outside of the cartoons, Spikor is portrayed as a master of combat and a blacksmith. In fact he created the Terror Claws for Skeletor. Part of me finds that really interesting. Ultimately Spikor is a background character that just pops up every now and again, but he still has a use other than just another soldier. That's neat. Spikor may be one of the more under the radar characters in Masters of the Universe, but sometimes, those are the more interesting ones.

at August 17, 2022
Email ThisBlogThis!Share to TwitterShare to FacebookShare to Pinterest
Labels: evil warriors, Masters of The Universe, mattel, motu, skeletor, spikor, Zone Base