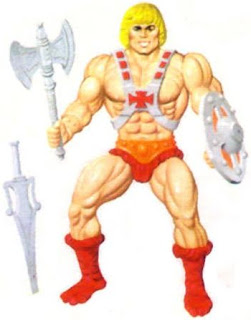 When it comes to He-Man, we've all pretty much know what to expect. However, it wasn't always that way and was a more grim affair initially. He-Man himself was a barbarian from a jungle tribe off on adventure to fight evil when he ran across the Sorceress who gave him weapons to fight Skeletor (said evil). If you've ever wondered about the mix of mid-evil fantasy and sci fi in Masters of the universe, the original setting had Eternia left as sort of a wasteland and all the high tech stuff was leftovers from the previous more advanced society. He-Man's power weapons were some of these leftovers.

The Power Sword originally wasn't really that much of a big deal. It was literally half a sword. The full Power Sword had been split in half as it is the key to Castle Grayskull. Skeletor has the other half and really wants control of the magical castle. The armor provides He-Man with a protective force field. There's another identical set of armor that makes him stronger. I have no clue how he tells them apart. He-Man mainly used his battle axe, and shield as he was a barbarian. You know like that guy he totally isn't supposed to be. In the first mini comic appearance, He-Man has a knife stowed away in his boot. If you get his Micro Action figure, it comes with that little knife. Neat huh?