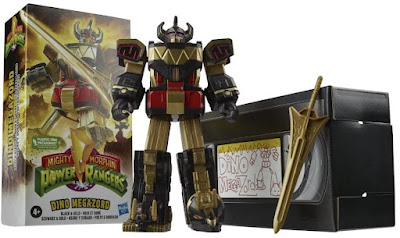 Hasbro has started releasing these super cool figures of the Megazords from Power Rangers and I'm loving it. They're exclusive to Walmart here in the states (not sure about elsewhere) and I was interested when they were first announced. Now that I have a few, I'm ecstatic with this line. They may seem simple. That's because they are simple and THAT'S the best part. You guys know me, not everything has to be super articulated for my enjoyment. However, the simplicity of these leads to what makes them great. They match up perfectly with my Godzilla toys.

While the Megazords are made from a harder material. They're also very similar in build, sculpt, and style to Godzilla and other kaiju vinyl figures. Which is a lot of kaiju fans preferred way to have giant monsters in toy form. At around the same scale as your general kaiju vinyl toy, and with similar articulation, this is a great way to pit the Thunder Megazord against Hedorah.

Considering the Playmates Godzilla toys are just a few feet away from these at my local Walmart (at one point they were right next to each other), and that many people like one series because they like the other (I was a kid who liked Godzilla movies when I discovered Dynaman one night on USA). It's all to perfect. The line consists of various Megazords throughout the history of Power Rangers packaged in VHS style boxes. The boxes are a fun little touch that allows for neat storage when they're not on a shelf themselves. Or even on a shelf in those neat boxes in a way that's easy to organize and look cool at the same time.