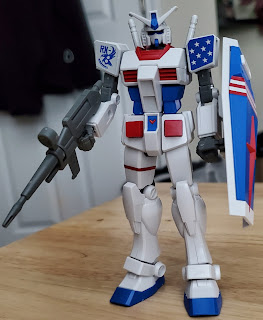 RX-78-2 is pretty much the main Gundam in the overall sceme of things. It's kinda of like the Optimus Prime of Gundam. Ironically Takara copied the head for Convoy, but that's another post. My point is, it's every where when it comes to Gundam. This particular version is a Entry Grade Gunpla sold exclusively at Target. Fictionally it's a statue from Gundam Breaker Battlogue, I like it because it's neat. I'm a fan of oddball variations like Police versions or in this case, an American edition Gundam. So you can see why I was happy to find it included with the gifts from the Mrs at Christmas.

I mentioned above that this is an Entry Grade model, which means it's a simple kit that can be assembled easily in not a lot of time. I had a good time with my nippers assembling this guy while watching paranormal TV a few weeks back. I also ate a salad, it was exquisite. You probably notice the stickers that match the patriotic colors. They were pretty simple over all and the 'RX' logo on it's right should also came in red. I opted for the blue. I think I put the stripes sticker on the shield upside down. Something I didn't notice until it was too late. Fortunately they look the same regardless.

This was a fun, simple kit that looks great. The American version is a fun variation that's not too far removed from the standard look of the RX-78-2's. The finished figure after assembly has a good deal of articulation and can be put into a variety of poses. While the simplicity of the build may not appeal to advanced Gunpla folks, it was a fun evening for me.