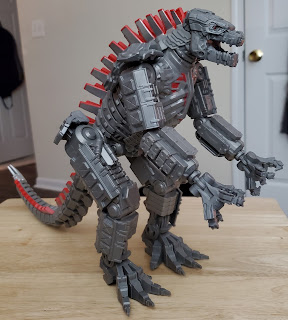 I feel like I've been championing the Playmates Godzilla toys since they've been released. To be fair, I was initially critical like others. Some of those early photos weren't promising. I acknowledged the lines faults and have watched it improve as time went along. That's how toy lines work, the initial figures are usually a little rough and things get smoother out as the team finds it's groove. This is the Giant sized MechaGodzilla from their Godzilla vs Kong line. It was one of the Christmas gifts from the Mrs. and I'm quite fond of it.

While Kiryu is my favorite version of MechaGodzilla, this newer Monsterverse version sure is neat. I like how it looks like a robot skeleton. Kiryu is made from skeletal remains of the original Godzilla who's ghost is in there, while this Mechagodzilla is initially controlled by the skull of Ghidorah before being possessed by Ghidorah's consciousness. Mechagodzilla's can be pretty spooky. Good.

This is the giant version of Mechagodzilla. It stands 11" tall, while the standard one is 6". I wished I would have measured it from nose to tail, because that seems a little longer. Like most kaiju toys, he doesn't have a lot of articulation. Head, shoulders, legs, hands, feet, and some tail swivel. Most is pretty standard stuff for a sofubi or these sofubi inspired action figures. The hands though are pretty neat, they swivel at the wrists as well as open and close. This allows him to pick up a bus and throw it back down as well.