He has CLAWS and he's AWFUL 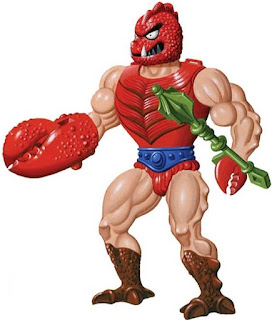 Sometimes I'll completely miss something obvious. It took me forever to realize the pun in Clawful's name. You see, he's a bad guy, so he's awful. Also has claws. Admittedly it's because he came out when I was a kid and completely oblivious to such things. Regardless, despite being such a silly idea, Clawful is a pretty great toy.

As a member of the Evil Warriors, Clawful is a crab/human hybrid. You'd think he'd be more aquatic based, but nope. He's just walking around anywhere. Ready to pinch Fisto's ass and hit him with that shell cracker. Considering the majority of clothing on Eternia, it makes sense as to why he's so threatening.

Depending on the fiction, Clawful is either a serious threat or an idiot. Sometimes Skeletor's right hand monster and other times not trusted. I'm pretty sure they wanted to eat him. The right claw alone could feed Snake Mountain for days!