Stratos Of The Bird People And The Wings Of Doom 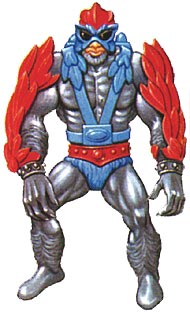 I've talked before about various MOTU guys I initially didn't pay much attention to and Stratos is right there with them. There were so many different characters and toys in the original series it was super easy to do so. It didn't help that some of the earlier ones like Stratos seemingly got buried under other toys when they were new. I don't remember ever seeing him at the store. Zodac and Tri-Klops always seemed to sit at drug and grocery stores, but the bird guy? Nope. It's not that he isn't cool, he is. There's something inherently great about a monkey/bird guy with a jet pack.

Fictionally, Stratos is the leader of the Bird People. Which is a race on Eternia that is exactly what it sounds like. Stratos reminds me a little of the winged monkeys from The Wizard of Oz. Which is probably intentional as he was originally planned to be a Evil Warrior member. You can spot him in Skeletor's crew in the first mini comic and early promotional material. Like Moss Man he uses the Beastman mold with a different head and flight gear/wings. Originally anyway, there's some new sculpts in other toys while I'm sure they reuse what they can in others.

Some of those early mini comics had Stratos in flesh colors instead of gray. I'm sure that's a holdover from conceptual artwork and thankfully it eventually got corrected. Despite He-Man's attire, something about Stratos was pretty unsettling. Maybe it was all the body hair. Despite initially not being to concerned with him, these day's I'm pretty fond. I'm currently trying to track down his Eternia Mini figure which has turned out to be quite elusive. Guess I'm not the only weird money/bird guy fan,

at September 10, 2021
Email ThisBlogThis!Share to TwitterShare to FacebookShare to Pinterest
Labels: eternia minis, He-Man, heroic warriors, Masters of The Universe, mattel, motu, skeletor, stratos, the wizard of oz, Zone Base