I finally found some Mini Pufts. They come blind packed in little cans of slime 'marshmallow creme'. The slime is a little old since they've likely been sitting in storage since last summer. It's a pool of sticky crap. The wife (who makes slime) told me to mix it up and it reconstituted into a solid slime again. The paper plate is full of baby wipes from trying not to make a mess in the living room.

The figures are in a baggie inside the slime, and another baggie inside it. I got the melted guy and the on fire guy. The figures are pretty neat and you can remove the paper wrapper from the can which makes them look like a jar of Fluff. There's a non-can of slime variety available in some countries... that I hope becomes a dollar store version of these guys here. That's some messy slime to work through, but some neat little Sumerian terrors. 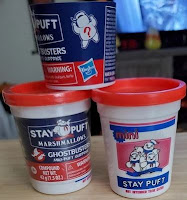