Whiplash And His Tail From Hell 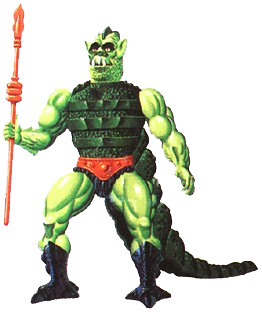 Whiplash is another on of the MOTU gang I just don't think a whole lot about. I gotten a few figures of him as an adult, but as a kid, I couldn't have cared less. He's cool looking, a big reptilian muscle head with a giant tail to smash you with. In the mini-comics he's a big bruiser that the heroic warriors will have a hard time with. Though in the cartoons he's generally depicted as a dim witted lackey. The original Filmation show did go in a little further and for the better.

Instead of a generic lizard man who just happened to work for Skeletor, he's actually from the Demon Zone. A dark underworld of sorts where he serves  Kraal, who runs the Demon Zone. The barrier between Eternia and the Demon Zone can only be opened twice a year. Whiplash is generally on Eternia all the time... so it's safe to assume he's stuck there for some unexplored reason. This probably is what led to working for Skeletor.

The reason I've been showing interest in Whiplash lately is his appearance in Revelation. He's now a member of Motherboard. A group of former Evil Warriors who worship technology led by Tri-Klops. The group ritualistically drinks this electronic/magic water that comes from an altar inside Snake Mountain. Doing this causes them to grow cybernetic appendages. Whiplash's new upgrades are a cybernetic eye and armor plates with a new wrecking ball at the end of his tail.

Recently I got the Eternia Mini and found myself more interested in him than before. Who I've always regarded as a background guy, turns out is some weird demon monster from Eternia's version of Hell. Now a cyborg demon monster from Eternia's version of Hell. It's weird that the Filmation cartoon, which is generally regarded as goofy, is the one source of fiction to do something like that with him as opposed to the supposedly more mature 200X cartoon. Not complaining though, the more I re-watch the Filmation series, the more I'm finding to love about it. It's part goofball, part nightmare. All awesome.