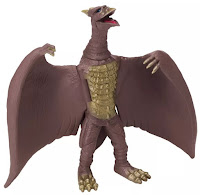 I've made no secret of my love for the Playmates Godzilla line. It's a fun series of relatively cheap kaiju figures found easily at my local big box stores (formerly exclusive to Walmart, but now available at others). The figures are sometimes re-releases of Bandai figures, or brand new toys that admittedly can be hit or miss. Though they've been mostly hit after the initial batches. Pretty good, actually.

Recently new listings of upcoming toys have been making their way through various kaiju groups. This is pure joy as the new toys are fan favorites and like I said, never Playmates figures have been pretty good. From the list of figures, I'm sure the Jet Jaguar is a re-release of the one from earlier this year. However the rest are all brand new and I'm freaking stoked. Rodan, Mecha King Ghidorah, and original King Kong are the ones I'm most excited for. Though the others aren't too shabby either.